The company has bagged exclusive mobile rights for Asia Cup coverage and has announced partnership with Vuclip and UTV Indiagames as well.

Value added services provider vRock Mobile on Tuesday announced that it has bagged mobile rights for the forthcoming Asia Cup cricket tournament. The Asia Cup is scheduled to take place in Sri Lanka from June 15 to 24, and will have cricket teams from India, Pakistan, Sri Lanka and Bangladesh participating in it. 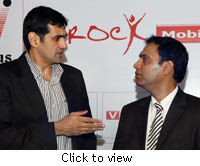 The company has signed an agreement with broadcaster Nimbus Sports for providing score alerts via SMS, video streaming, video clips, interactive voice response etc.
vRock has already roped in telcos such as BSNL, MTNL, Aircel, Tata Indicom and Tata Docomo for providing services to their subscribers. Jatin Ahluwalia, chief executive officer, vRock Mobile Communications, told Telecom Yatra that they are in discussions with other leading mobile operators and are awaiting responses from Airtel, Idea and Vodafone. vRock has the rights to the Asia Cup for the next two seasons till 2014. This is vRock’s second deal, the first being the five year contract with IPL for matches.
Ahluwalia says that though they are laying strong emphasis on sports right now, they plan to introduce lifestyle events.
vRock has also partnered with technology company Vuclip to power its mobile video search and UTV Indiagames for developing mobile games based on the Asia Cup.
Taking about services to be launched in the near future, Ahluwalia said, “We are going to launch our viral communication service. It would include value added voice services like voice blogging. We have partnered with Bubble Motion for this service. The service should be launched in the next quarter.”
Bubble Motion is a global provider of mobile messaging and social media applications. It offers services like BubbleTalk, a personal voice messaging service, Bubbly, a voice-based social networking service and BubbleCast, an audio content broadcasting service.
Although the company will continue offering services via network services providers, it plans to have a direct consumer portal as well.