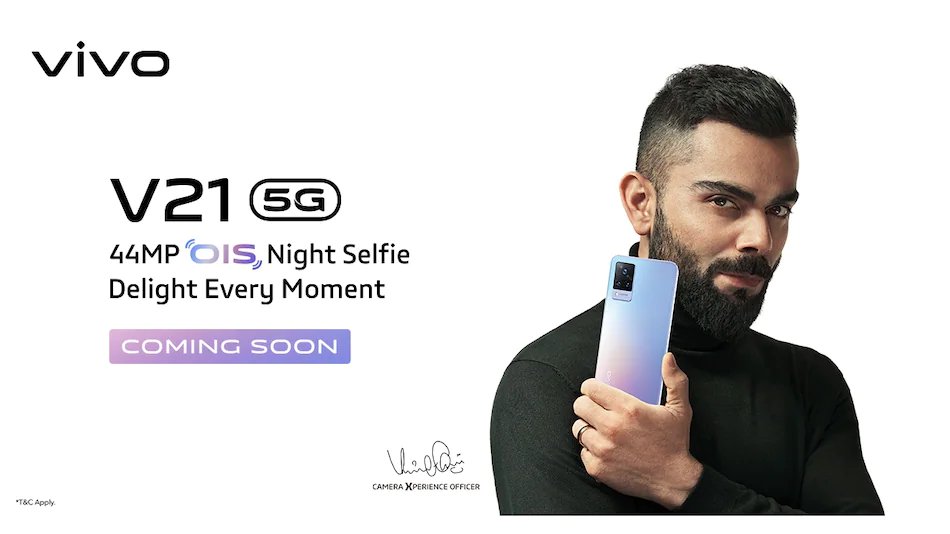 Vivo V21 5G will be launched in India soon, and it will come equipped with a 44-megapixel selfie camera with OIS (optical image stabilization).

Vivo India Twitter handle has announced that Vivo V21 5G will be launched in India soon, and it will come equipped with a 44-megapixel selfie camera with OIS (optical image stabilization). The tweet carries an image of the upcoming phone which shows there will be a triple rear camera setup.

Flipkart has also started teasing Vivo V21 5G launch in its portal which means the phone will be available on Flipkart after launch.

Vivo V21 5G specifications have been tipped by tipster Sudhanshu in a tweet. As per him, the Vivo V21 5G will be powered by the MediaTek Dimensity 800U. The phone will sport triple cameras including a 64-megapixel primary sensor, an 8-megapixel ultra-wide-angle lens and a 2-megapixel macro camera.

Vivo V21 5G is said to run Android 11 and it will come with a hybrid SIM slot. There will not be a 3.5mm audio jack in the device.

As per rumours, Vivo will be launching Vivo V21 5G on the same day as its Malaysian launch. If true, the Vivo V21 5G will also in India on April 27.