Vivo V15 Pro carries model number Vivo 1818 and it will be powered by sm6150, which is nothing but the codename for the Snapdragon 675 chipset.

Vivo has scheduled a launch event in India on February 20 in which the company is expected to launch the Vivo V15 series which includes the Vivo 15 and Vivo V15 Pro smartphones. Now ahead of the launch, Vivo V15 Pro has now appeared on the Geekbench benchmarking website, revealing some of its key specifications.

As per the Geekbench listing, the Vivo V15 Pro carries model number Vivo 1818 and it will be powered by sm6150, which is nothing but the codename for the Snapdragon 675 chipset. 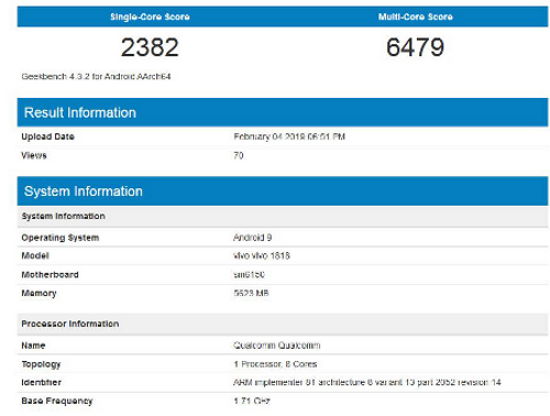 Further, the listing reveals that the Vivo V15 Pro will be featuring 6GB RAM and it will run Android 9 Pie operating system out-of-the-box. The device has scored 2382 and 6479 in the single-core and multi-core tests respectively.

The Vivo V15 Pro smartphone will feature pop-up selfie camera. The phone will likely be featuring notch-less AMOLED screens and a triple-camera setup on the rear. It will be equipped with an in-display fingerprint scanner.

Vivo V15 Pro is expected to be the successor to the V11 Pro which was launched in India last year. For the specifications, the Vivo V15 Pro will likely to feature a 6.5-inch display with Full HD+ resolution. The backside of the phone will have 48-megapixel + 8-megapixel + 5-megapixel triple camera setup. The front panel will have a 32-megapixel pop-up camera.