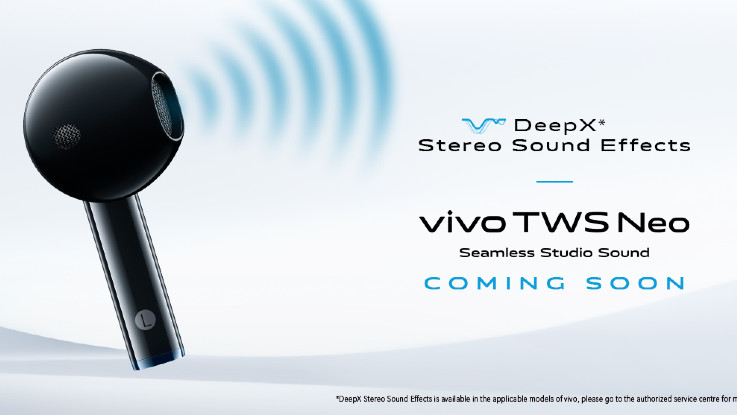 The company has revealed that it will launch Vivo TWS Neo wireless earbuds in India soon.

Vivo has announced that it will be launching its flagship series, the Vivo X50 in India on July 16. Now, the company has also teased that it will soon launch its new wireless earbuds in the country.

The company has revealed that it will launch Vivo TWS Neo wireless earbuds in India soon. The company revealed this information on it’s the official Twitter handle. The tweet reads, “Welcome to the world of music with unmatched clarity that takes you on an immersive journey. You can never get enough with the DeepX Stereo Sound effects with 14.2mm moving coil that is designed to impress.” The brand has not revealed the launch date for the upcoming wireless earbuds, but one could expect it to launch alongside the Vivo X50 series, which is scheduled to launch on July 16.

To recall, Vivo introduced TWS Neo in China in June this year. The earbuds are priced at approx. Rs 5,300 in the Chinese market and it comes with two colour options Interstellar Blue and Moon White.

The Vivo TWS Neo earbuds come with Bluetooth 5.2 to connect to devices, along with support for the Qualcomm aptX Bluetooth codec. It has DeepX audio effect for strong bass, clear voice and treble. The earphones come with 14.2mm drivers for better audio output. There is also a new low-latency game mode of 88ms for gaming and video calls. The earphones are IP54-rated for dust and water resistance.

The buds feature touch controls for volume and track change. There is also a two-microphone system with noise reduction during voice calls. In terms of battery life, each bud is claimed to offer 5.5 hours when using the AAC codec and 4.2 hours with the aptX codec. Combined with the charging case, they offer up to 27 hours of audio playback on the new earbuds.