Twitter rolls out new DM feature on its platform 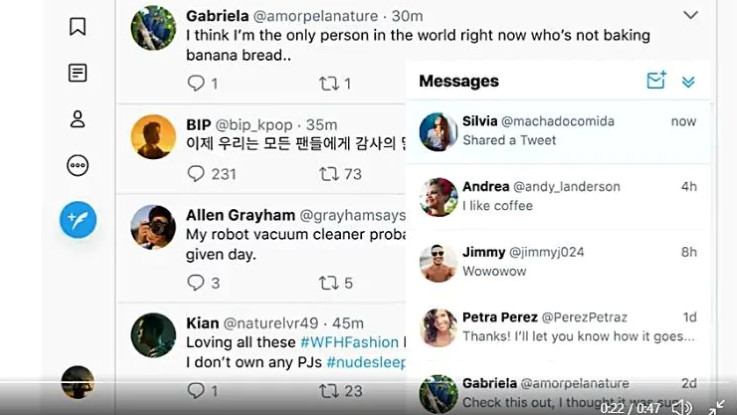 The company has rolled out a new DM feature that will allow users to reply or read messages directly from the home page.

Twitter has revealed that it is rolling out a new feature for its users that will make it easier to reply to messages. The company has rolled out a new DM feature that will allow users to reply or read messages directly from the home page.

Previously, in order to read DMs, users were required to leave the home page and go to the DM section. However, with this update, the DM will appear at the bottom right corner of the screen. The feature is similar to what we have seen in Facebook, Linkedin and more.

With this feature, users will now be able to reply to a message from the home page with ease. The company revealed this information on its official handle. The tweet reads, “Slide into those DMs without clicking away from your timeline. Rolling out on the web.”

As of now, the feature is available for the web client, though there is no information whether the same feature will be available for Android and iOS applications. Previously, the brand introduced a new voice tweet feature for its users. The feature is currently available to a limited group of people on Twitter for iOS to start but in the coming weeks, everyone on iOS will get this feature.

Voice tweets basically let users record audio as a tweet. There will be a new icon with wavelengths when you open Tweet composer. Users need to tap on this button to record their voice.

The company says that each voice tweet captures up to 140 seconds of audio. The brand has further revealed that once the audio limit is reached, a new voice tweet starts automatically to create a thread. Once the user is done, he/she can simply tap on the Done button to end the recording and go back to the composer screen to Tweet.