Time on Wifi spent is the time spent by a person using the internet via his Wifi Connection. In India, the COVID-19 has had a strange impact on the Time on Wifi. Continue reading to find out more.

The COVID-19 pandemic has triggered a global shutdown with countries forcing its citizens into their abodes. People are finding different ways of entertaining themselves at home with most of the ways needing the use of the Internet. Be it gaming, video calling or binge-watching or your favourite shows, all of these activities require an internet connection. Countries on lockdown should see a rise in internet usage deduced basic logic. But surprisingly, that is not the case.

A report by OpenSignal suggested that “Time on Wifi increased significantly on a week-on-week basis in the third week of March in many countries in Northern America and Europe, as well as in Australia, Argentina, Peru and Brazil.” This means that people using their wifi connection increased during these times in western countries. However, according to the report “Opensignal did not detect a statistically significant week-on-week increase in the percentage of time Indian smartphone users have spent on Wifi between the second week of January and the third week of March.” This suggests that the Indian user base for Wifi did not show a very noticeable spike which is rather odd given its massive population and high internet usage.

What could be the reason?

The most logical explanation could be people not opting for a wired broadband connection(which also provide WiFi). This could be due to the fact that mobile internet providers like Jio provide high data capacity at a very nominal rate and at 4G speeds. An average user might not need a broadband connection altogether and a smartphone’s hotspot internet sharing capabilities might just serve him well. Another factor that is tied to a broadband connection is its installation and data packages. Installation charges along with their data packages can become more expensive than your mobile internet package and need more physical infrastructure which might not be available at certain locations altogether. Also, the fact that home WiFi cannot be carried with you whereas your mobile internet can also contribute to the cause. 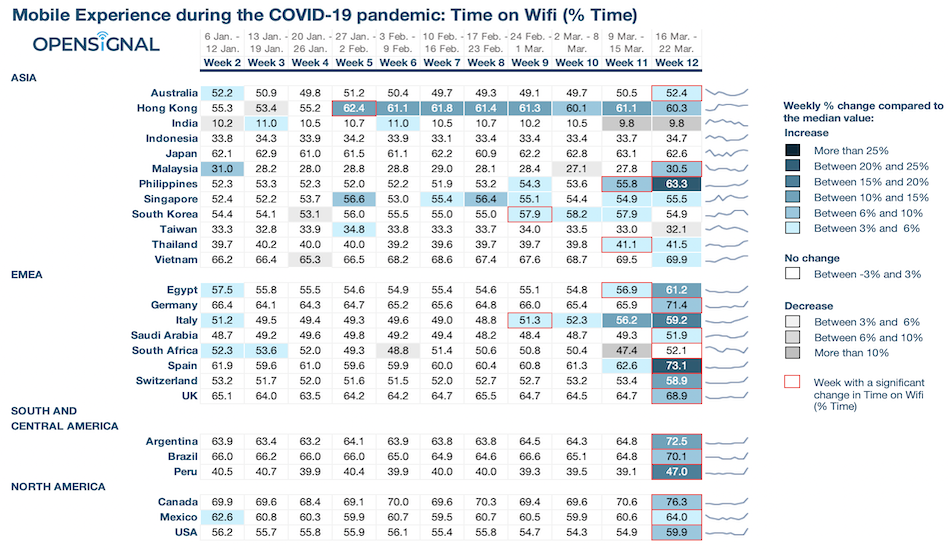 It should be noted that India has the world’s second-highest internet users in the world with 5,00,000 users in Q2 of 2020 according to Internet world stats. Other Countries in the region where a significant increase in Time on Wifi in either or both the second and third weeks of March include Australia, Malaysia and the Philippines.