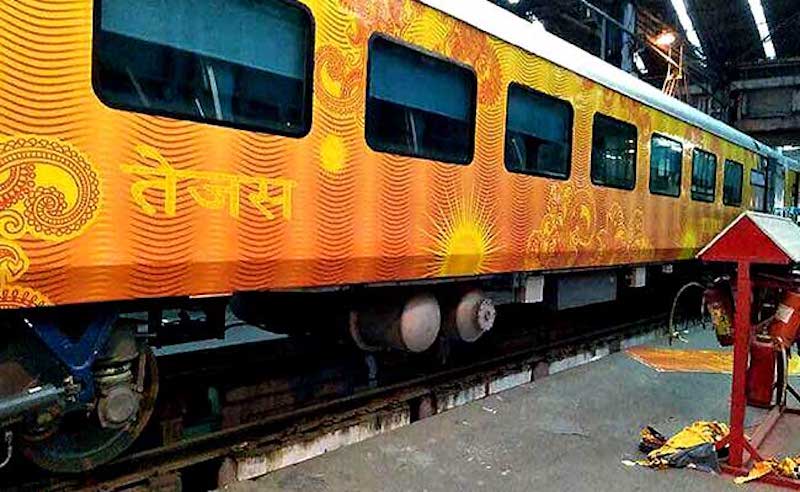 Tejas Express is faster than the Shatabdi Express with a top speed of 200 Km/Hr. Runs between Mumbai and Karmali in Goa five days a week. The executive class fare has been fixed at Rs. 2,680.

Indian Railways has been flirting with modernisation albeit very slowly. One of the first modernised and technologically advanced trains launched by the Railways is the Tejas Express.

The newly launched Tejas Express comes with many modern amenities such as WiFi, infotainment systems, LED TVs, CCTV etc. With a top speed of 200 kmph, the latest Tejas Express is faster than the Shatabdi Express. It has a graffiti proof body and fire and smoke detection facilities. The doors of all 13 coaches are centrally controlled. Ironically, all the in-train comforts come on a train that will traverse possibly one of the most beautiful routes for a train ride in India, the Mumbai to Goa Konkan route.

“Tomorrow is going to be a historic day for the Indian Railways when Tejas Express, which boasts of ultra-modern amenities like on board infotainment, Wi-Fi, CCTV, fire and smoke detection facilities, tea/coffee vending machine etc. will make its maiden run from Mumbai,” D K Sharma, General Manager of the Central Railway, said. Sharma, who inspected the train at the Chhatrapati Shivaji Terminus, Mumbai (CSTM) likened Tejas Express with an “aeroplane moving on the ground”.

“I would say that traveling by this premium train would provide a better experience than flying in a plane. This train would pass through the lush greenery of the Konkan belt, giving a picturesque view of the seashore, mountains and valleys, which will let you enjoy the journey and not just the destination (Goa),” he said.

When asked about reports that a few miscreants had damaged the windows of the Tejas Express, even before its launch, the official said, “We have taken proper note of it and it is no more an issue now.”

Giving the details of the route and schedule of the train, Sharma said it would run between Mumbai and Karmali (Goa) five days a week during non-monsoon period and three days a week during monsoon by halting at Dadar, Thane, Panvel, Ratnagiri and Kudal stations.

“Train No 22119 Superfast Tejas Express will leave CST at 5am every Tuesday, Wednesday, Friday, Saturday and Sunday from May 24 and arrive at Karmali at 1.30pm the same day.

Train No 22120 Superfast Tejas Express will leave Karmali at 2.30pm on every Tuesday, Wednesday, Friday, Saturday and Sunday, starting from May 23 and arrive at the CST at 9pm,” he said.

This train will have one executive AC chair car with 56 seating capacity and 12 AC chair cars with 78 seat capacity of each coach, Sharma said.

Kumar, who accompanied Sharma during the train inspection, added, “The ticket booking started within minutes of its opening this morning and in the first four hours, 207 passengers booked tickets for the AC chair car and 10 for executive AC chair car.”

Kumar also informed that the railways has planned optional onboard catering services. “If a passenger does not opt for catering services at the time of booking the ticket and decides to buy meals onboard, an extra amount of Rs. 50 per service in addition to the prescribed catering charges, shall be charged subject to availability,” he added.