Tecno launched Spark Go smartphone last year in India. Now the company is said to be working on Tecno Spark Go 2020. The new phone has been leaked online via Google Play Console listing.

The listing has revealed the key specs and a render of the upcoming Tecno Spark Go 2020 smartphone. The render only shows the front panel of the device. As per the render, the phone will come with a waterdrop-style notch on the top for the selfie camera and the display comes with minimal bezels around the edges. The volume rocker and the power button seem to be on the right side of the phone.

For the specs, the Tecno Spark Go 2020 is listed with 720 x 1600 pixel resolution and 320ppi. The listing further reveals that the phone will come with 2GB of RAM and it will run on Android 10 operating system. 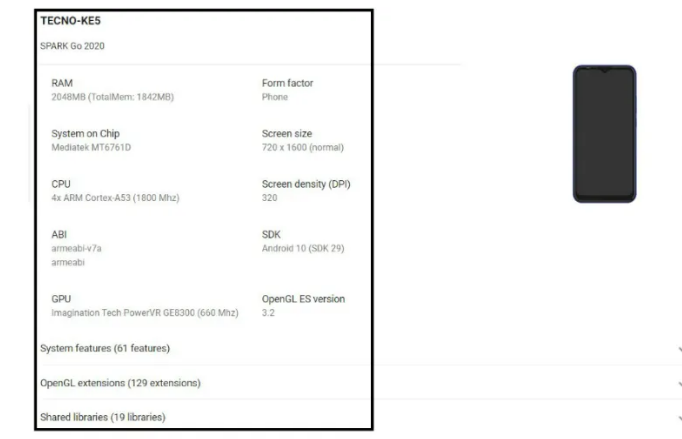 Under the hood, the Tecno Spark Go 2020 is powered by a MediaTek MT6761D chipset with four CPU Cortex-A53 cores. The listing also shows PowerVR GE8300 GPU. Apart from these few details, the listing does not shed any information regarding cameras, storage and battery capacity.

Tecno recently launched Tecno Spark 6 Air smartphone in India at Rs 7999. The phone comes with 7-inch HD+ dot notch display and a massive 6000 mAh battery. The Tecno Spark 6 Air has a triple rear camera setup. It is powered by the MediaTek Helio A22 SoC coupled with 2GB RAM and 32GB internal storage that is further expandable via microSD card.