California based brand Swipe, which had started its operations in India with the launch three Android tablets back in the month of July last year, has announced the launch of its first ever phablet in partnership with MTV, named as the Swipe MTV Volt, for the Indian market.

The Swipe MTV Volt is a 6 inch screen bearing phablet that comes with an exclusive inbuilt TV-player offering viewers on-the-go access to the content of MTV. The Swipe MTV Volt will go on sale for Rs 12,000 and will be available across 10,000 retail points across India, Swipe e-store and also leading online portals like Flipkart, Snapdeal, Infibeam and eBay amongst others. 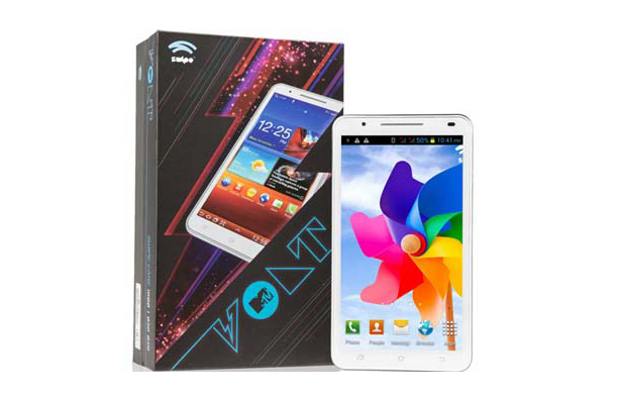 The Swipe MTV Volt offers some nice hardware specifications as well that include a 1 GHz dual core processor based on ARM Cortex architecture. The processor is supported with 512 MB of RAM for faster operations and the Android Jelly Bean 4.1 operating system. The device’s 6 inch capacitive touch input system based display features a resolution of 854 x 480 pixels; the unconventional size adds utility and portability both to the device.

The phablet has 4 GB of internal storage slot which can be further extended to another 32 GB with the use of an external micro SD memory card. There is an 8 megapixel main camera that supports video recording and a 1.3 megapixel front facing camera. The Swipe MTV Volt V3 features a 3200 mAh battery pack which comes with a claimed 8-10 hours of battery backup time. Along with that the Swipe MTV Volt also comes in a V4 variant with a 4000 mAh battery pack for longer backup times.

Talking about MTV VOLT, Sandeep Dahiya, senior vice president and business head -consumer products – Viacom18, said, “MTV VOLT is a ‘made to order’ product for the generation that’s constantly communicating, entertaining and socializing. With features that address their needs and price-point that suits their pockets, we’re confident about MTV VOLT by Swipe, to generate a great response.”