Spice has announced a new 7 inch 3G calling tablet, called the Slatepad. As per a listing on its website, the Spice Slatepad tablet comes with Android 4.1 operating system, 7-inch screen and voice calling functionality.

The tablet is also quite rich in terms of connectivity options with Bluetooth 4.0, GPS, 3G and WiFi. It is a fairly average tablet in terms of other hardware though which include 1 GHz processor, 512 MB RAM, 7 inch display with 1024×600 pixel resolution and 3000 mAH battery. 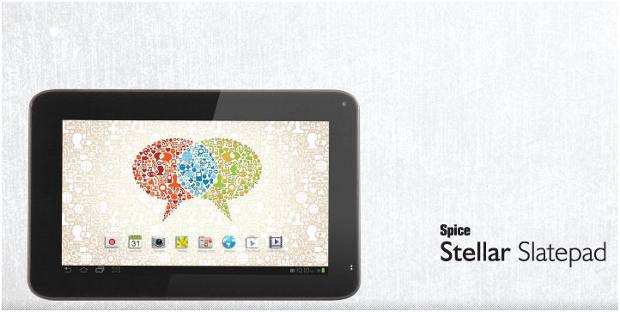 The tablet sports a 3.2-megapixel rear camera and a 1.3-megapixel front shooter. The rear camera feature auto-focus and night vision.

It comes with 4 GB of internal storage which is expandable up to 32 GB via a micro SD card. The tablet has been priced at Rs 8,499.

Its competitor, Karbonn Tafone A37 comes with 1 GHz dual core processor but with inferior resolution of 800×480 only and only a 2 megapixel camera despite being priced alike.