The new Sony H.ear series are available for a starting price of Rs 6,990.

Sony India today launched two headphones and two earphones of its H.ear series in India. The new MDR-EX750AP earphone is the cheapest among the four with a price tag of Rs 6,990 while the Sony MDR-EX750NA earphone is priced at Rs 9,990. The two new headphones, MDR-100AAP and MDR-XB950BT, are priced at Rs 12,990. 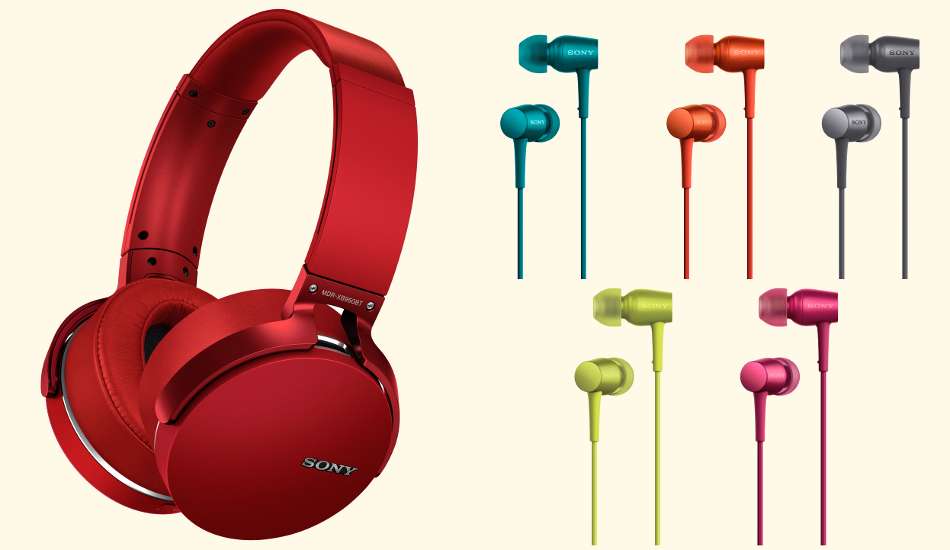 Note that the MDR-XB950BT was earlier available too but this time it has made its re-entry into the Indian market in red colour. Both the MDR-100AAP and MDR-EX750AP come in five vibrant colours – viridian blue, cinnabar red, charcoal black, lime yellow and bordeaux pink. The Sony MDR-EX750NA earphone is available only in black colour.

Sony’s MDR-100AAP comes with a 40mm HD driver unit that, as per the company, can reproduce sounds of up to 60kHz and its lightweight CCAW voice coils yield high-linearity responses in high-pitched sounds. This headphone has titanium-coated diaphragms to minimize unwanted vibrations, and thus provide crystal clear tunes, claimed Sony. The headphone comes in foldable mechanism and has a detachable, cross-talk reducing cable in matching colour. Sony is also offering a pouch with this headphone.

The MDR-EX750NA noise cancelling earphone has a 9mm driver unit and it can reproduce frequencies of up to 40kHz. It has two built in microphones no cancel unwanted noise and it has built-in lithium-ion battery that claims to offer about 16 hours of music playback. It has got a micro USB to recharge the battery.

The MDR-EX750AP features a 9mm driver and has 4-wire ground separate cable that cuts interference between left and right sounds, while the silver-coated OFC material helps to reduce transmission signal loss.

The Sony MDRâ€“XB950BT is an ‘Extra bass’ Bluetooth NFC wireless headphone boasting a 40 mm dynamic driver unit for powerful sound. With a charge of 4 hours, the headphone claims to deliver music playback for upto 20 hours at a go.