Even if the users are on a web page which doesn't have any videos, they still get recommendations based on what is there on the web page.

A new feature has been added to the Skyfire browser for iPhone and iPad that intelligently recommends videos depending on what the users are already browsing.

According to Skyfire, it is like Pandora’s music recommendation feature. Whenever users on their iPhone or iPad are browsing the web, the video recommendations are generated automatically by the Skyfire 4.0 browser, which are generated through crowdsourcing depending on the popular videos being viewed at that time.

Skyfire browser has so far been more known for playing Flash based videos on iPhone and iPad, and it has taken one more step ahead with the new video recommendations. There will be a new button at the bottom left corner of the Skyfire app which will display the list of videos. The lists are formed on the basis of community powered engine which ranks videos on the basis of popularity. 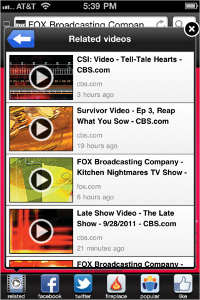 Even if the users are on a web page which doesn’t have any videos, they still get recommendations based on what is there on the web page. The Skyfire browser was launched in 2010 and is one of the most popular Flash playing browsers on the iOS platform.

Skyfire is also celebrating total ten million downloads after its launch in 2010. “Ten million downloads represents an exciting milestone for the Skyfire team, and we are extremely thankful to all those users who have supported our vision for bringing full access to all video on the Web. We believe in doing that in a mobile-optimised way that saves money for users on limited data plans, and is better for overloaded network operators as well,” said Skyfire chief executive officer Jeffrey Glueck.