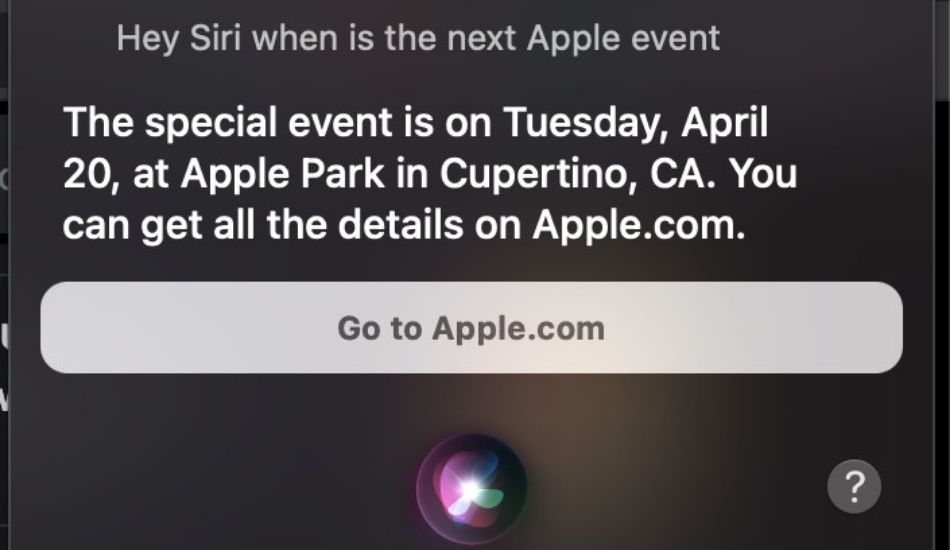 Apple’s Siri voice assistant might have accidentally (or maybe on purpose) revealed the date for the next Apple event that could bring new hardware from the brand to the markets. If you ask Siri, “When is the next Apple event?” It’ll give you a prompt reply with an April 20 date.

However, Siri isn’t providing any information about the event and asks the user to refer the Apple website for more information. The Apple event should be live-streamed on the company’s website and YouTube channel. If the date is legit and Siri is telling the truth, we are just a week away from the event.

Apple is expected to unveil the new iPad Pro lineup at the event along with AirTags tracker. As per a recent report, the mini-LED screen may be introduced in the larger iPad Pro model with a 12.9-inch panel while the other model will continue to feature LCD display. The report further states that there are a few production issues of the mini-LED display for the top-tier iPad Pro, leading to short initial supply.

This could mean while Apple will reveal the latest iPad Pro to the world this month, its shipping could begin at a later date. “The production hiccup could mean that the larger iPad Pro will ship later and be available in constrained quantities to begin with”, the report read. The two iPad Pro models are expected to launch in the second half of the month.

The new iPads are expected to feature a new chipset, which will be on par performance-wise with the M1 chip Apple introduced specifically for its latest MacBooks and Mac mini.