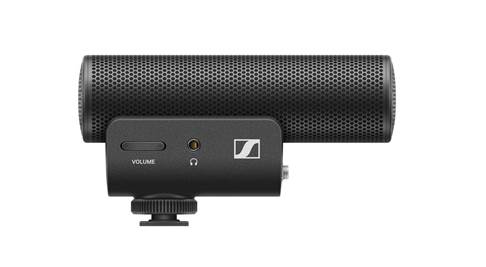 Sennheiser has launched a new MKE 400 Shotgun Microphone in India that comes with a host of features including automatic power detection, 100 hour battery life, and more

Sennheiser today launched the new MKE 400, a directional compact shotgun microphone that brings high-quality audio to DSLR/Ms and mobile devices alike, as per the company. Priced at Rs 16,900, the MKE 400 will be available from today, exclusively on Amazon.

The MKE 400’s shock-mounted capsule minimizes handling noise, while the cleverly designed microphone housing doubles as a standard windscreen as per Sennheiser. For outdoor use, a furry windshield is included. The MKE 400 achieves its directionality with an acoustic interference tube, providing a super-cardioid polar pattern that ensures pick-up from the direction the camera is facing while cancelling out distracting noise from the sides. 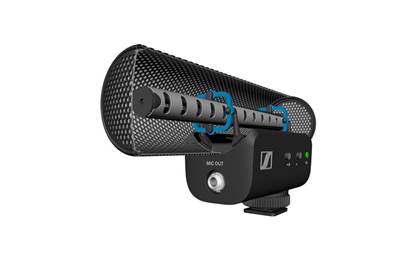 MKE 400 is fitted with a low-cut filter and three-step sensitivity switch, a headphone monitoring output, and integrated 8-step digital volume control. Not every camera has its own audio output. There is a 3-step sensitivity switch that adjusts the audio level to the mic input of the camera. One can plug any headphone with a 3.5 mm (1/8”) jack directly into the MKE 400 and conveniently check levels and audio performance while rolling.

MKE 400 includes 3.5 mm TRS and TRRS locking cables to be used with DSLR/M cameras or mobile devices. The mic’s cold-shoe mount with ¼-20 thread allows for universal mounting atop of cameras, gimbals or even at the end of a boom pole. 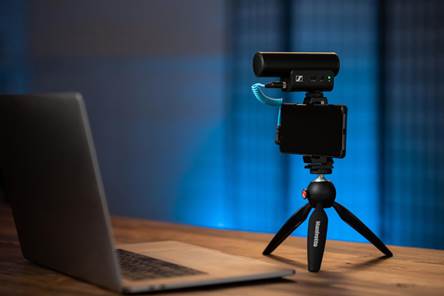 The MKE 400’s cables are coiled and locking so they stay out of your way and stay securely connected while shooting. One would need two AAA batteries to power the microphone for up to 100 hours of continuous audio capture. A low battery indicator will warn the person three hours before the batteries run flat.

Power detection also works with many smartphone models. When connected to DSLR/M cameras, the MKE 400 automatically powers on/off with the camera. If one removes the MKE 400, it will automatically turn off. A manual power button is provided, too, featuring an off-delay to avoid any accidental operation.

The MKE 400 is also available with an  “MKE 400 Mobile Kit”, which additionally includes a Sennheiser Smartphone Clamp and Manfrotto PIXI Mini Tripod in a convenient package. It has to be purchased separately.