As The Mobile Indian had reported earlier, Samsung today launched its much awaited Galaxy Note 10.1 in India. The big brother of the older 5.29 inch display bearing Galaxy Note N-7000, comes with a huge 10.1 inch LCD display and some really mind boggling features. It is priced at Rs 39,990.

It has two cameras – a 5 megapixel unit in the rear while a 1.3 megapixel unit is in the front. The rear camera is capable of recording 1080p full HD videos. Despite being a tablet, the Galaxy Note 10.1 comes with a SIM slot which you can use to call as well as for 3G connectivity.

For connectivity, there is WiFi, WiFi Direct, Bluetooth 4.0, USB 2.0, A-GPS etc. It has 16 GB of internal storage space but users can increase the space by upto 32 GB.

Its 10.1 inch display, which is also its highlight feature, comes with the all new PLS (Plane to Line Switching) technology. This technology allows the display to show better colours, contrast and even wider screen viewing angles than the existing IPS technology based screens. The resolution of the display has been kept quite similar to that of other 10 inch variants at 1280 x 800 pixels. 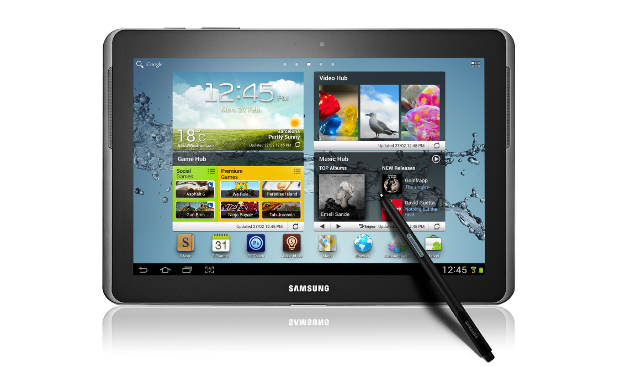 Along with that the Samsung Galaxy Note 10.1 comes with a brand new innovation from Samsung which is known as the Multiscreen feature. With this feature, users can effortlessly run two different applications side-by-side on the tablet. Users can view web pages or videos, or launch other applications while writing or sketching ideas with the S Pen on the other half of the screen and there will be no need to toggle back and forth between apps.