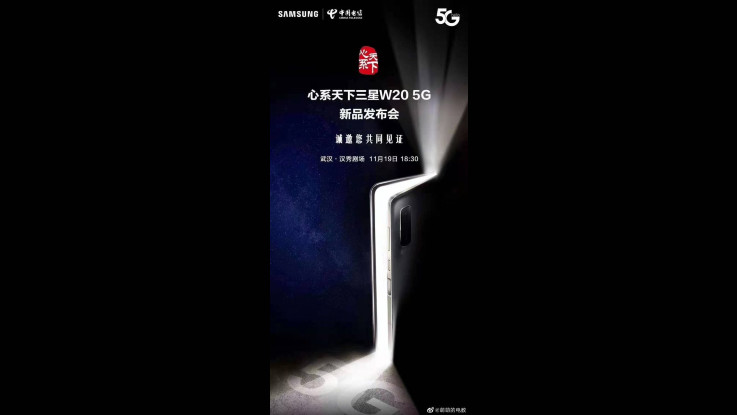 Samsung has revealed that it will launch the upcoming foldable smartphone in the country on November 19.

The brand has also posted a teaser image of the W20 5G foldable smartphone on Weibo. The image reveals a phone which is standing vertically and opening up like a book. Furthermore, one can see a vertically-aligned camera setup on the back. Additionally, the image also reveals side-mounted volume controls and a fingerprint sensor on the right side of the foldable phone.

With this, it seems that the brand is launching a rebranded version of the Galaxy Fold. The upcoming smartphone will also come with 5G support. Earlier, it was reported that Samsung W20 5G will be the latest foldable smartphone that the company showcased during its annual developer conference.

Samsung also showed how it has optimised the user interface for its upcoming Clamshell model. The video published by the company shows that when a user partially folds the device, the camera viewfinder takes the upper half-screen, while the camera controls get the bottom half place.

The video also reveals that the company will add three modes including a wide-angle mode, a normal mode and a telephoto mode. Interestingly, this also means that users might get at least three cameras on the upcoming Clamshell foldable smartphone.