Samsung has launched the new A-series, S-series and Q-series 2021 soundbar lineup in India. It includes the world's first 11.1.4 channel soundbar. 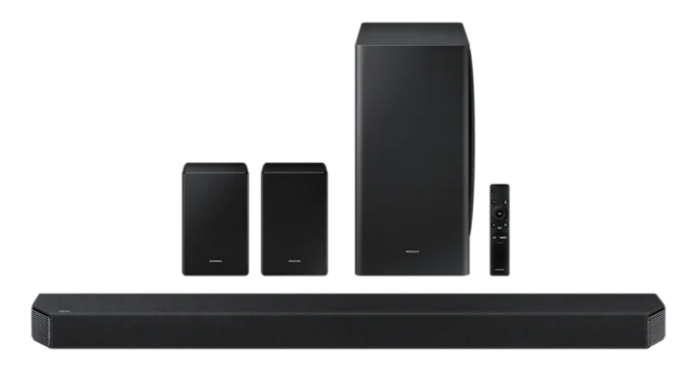 Samsung has launched the new Q Series, S Series and A series soundbars in India. The new lineup also includes the world’s first 11.1.4 channel soundbar. This soundbar should provide you with an enhanced audio experience.

Consumers buying the new soundbars can avail up to 10 percent additional cashback of up to Rs. 6,000 on credit and debit cards from HDFC Bank, ICICI Bank, Axis Bank, Federal Bank and Bank of Baroda. The soundbars are already available for purchase from Samsung’s official online store, Samsung Shop, and select Samsung Smart Plazas.

The new S-series soundbar from Samsung has horn speakers with an acoustic beam. This feature duplicates a room-filling cinema-style environment. There’s a tap sound feature through which one can just tap their phone to pair it with the soundbar. It is wrapped in premium fabric and has support for Alexa and AirPlay 2.

The most premium model in the Samsung Q series soundbars is the world’s first 11.1.4 channel soundbar. This enables the consumers to experience realistic 3D audio. The Q-Symphony technology helps you play a surround sound from both the TV and the soundbar. The soundbar has a dedicated game mode and has support for Alexa as well. You get up-firing rear speakers, Samsung TV Remote and Airplay 2 support, and Dolby Atmos/ DTS:X support as well. Apart from this, there’s also a SpaceFit Sound technology which analyses your environment and sets the sound as per what’s around you.

The new Samsung A-series soundbars feature Dolby Audio/ DTS Virtual:X technology. The soundbars also get enhanced wattage and a new Bass Boost feature. The A-series soundbars can automatically enhance voice clarity and other sounds depending on what content is being viewed. It achieves this using the Adaptive Sound Lite technology. These soundbars are equipped with inbuilt wireless subwoofers and also support Samsung TV remote.