The Samsung Galaxy Tab A 9.7 which was launched in 2015 with Android Lollipop has now got WiFi certification from the WiFi Alliance (WFA) with Android 7.0 Nougat onboard. The listing simply implies that Samsung is perhaps testing the latest software and may release the same for the device soon. 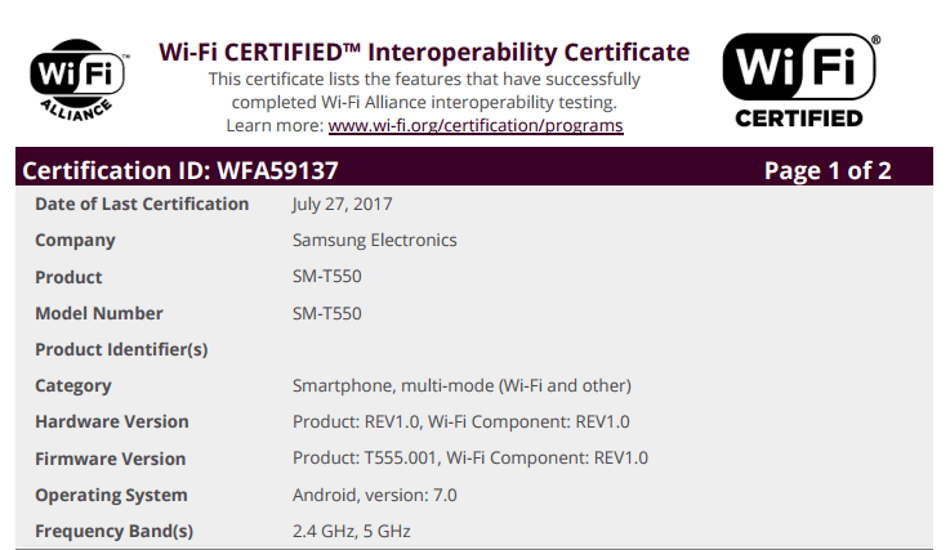 As per the listing, Samsung Galaxy Tab A 9.7 supports dual-band Wi-Fi a/b/g/n (2.4GHz,5GHz) and Wi-Fi Direct connectivity features. Sadly, the listing does not show any specifications except that the device will be powered by Android 7.0 Nougat operating system. The listing also reveals the tablet boasts the model number as SM-T550 with the certification ID WFA59137 and the date of certification being 27th July 2017. Since the device has got the WiFi certification, we expect the device to get Nougat update soon.

The tablet was launched with Android Lollipop but was later upgraded to Android Marshmallow operating system. Samsung Galaxy Tab A 9.7 has a 9.7-inch TFT display with a resolution of 1024×768 pixels. It comes with Android Marshmallow operating system and is powered by a 1.2 GHz quad core processor. There is 2 GB of RAM in the tablet with 16 GB of internal storage. The tablet also has an expandable storage slot that can carry a micro SD card of up to 128 GB. The Samsung Galaxy Tab A 9.7 has a 5-megapixel rear camera and a 2-megapixel front camera. For connectivity, it offers WiFi, GPS, micro USB and Bluetooth. The tablet, which measures 242.5 x 166.8 x 7.5mm and weighs 487 grams, has a 6000 mAh battery.