This is not for the first time that the price of, to be launched Smartphone smartphone has been leaked before its launch. Also, on previous occasions as well the leaked prices more or less have been found accurate.

Samsung Galaxy Note 9 is going to be launched at an Unpacked event on August 9. Now, just ahead of launch, the pricing of the upcoming phablet has been leaked online along with new colour options.

A Twitter user Bang Gogo has posted a leaked pre-order poster and it reveals the prices, storage variants and colour options of the upcoming device. To start with the price, the Galaxy Note 9 with 128GB storage will come with a price of 13,500,000 Indonesian rupiahs, which roughly translate to Rs 64,362. The 512GB storage option will be priced at 17,500,000, which roughly translate to Rs 83,433. 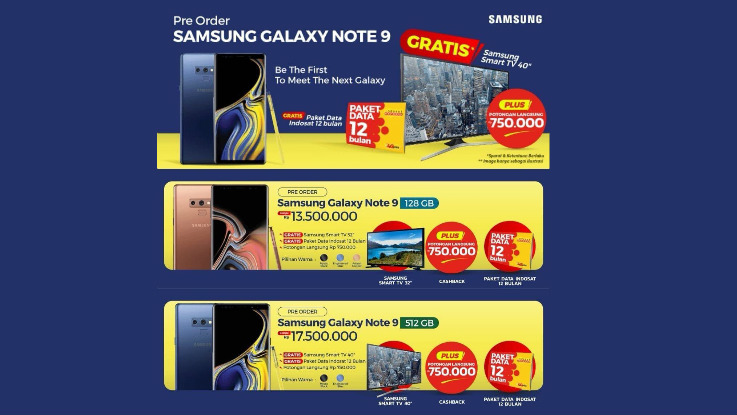 The promotional poster also reveals that the Galaxy Note 9 will come in three colour options including Mystic Black, Engineered Blue and Artisan Copper. Further, users pre-booking the upcoming smartphone will get a lot of freebies. Interestingly, the company is offering a free Samsung 32-inch TV with the latest device along with up to IDR 750,000 cashback and free 12-month data plan in Indonesia.

The prices are in line with the previous leak. As per a Polish website, Samsung Galaxy Note 9 will carry a price tag of PLN 4,299 which is approx. 79,370 for the base variant with 6GB of RAM and 128GB of internal storage. Samsung is also reported to launch a new Bixby speaker along with a smartwatch during the Unpacked event as well.

There is a dedicated section namely Galaxy Unpacked that features all the three recent teasers that have been posted by the South Korean giant. Users can also sign up to receive the notification about the availability of the product by entering some basic details like name, email ID and phone number.

Galaxy Note 9: What we know so far

Fortnite for Android could be launched as an exclusive to Samsung Galaxy Note 9: Reports