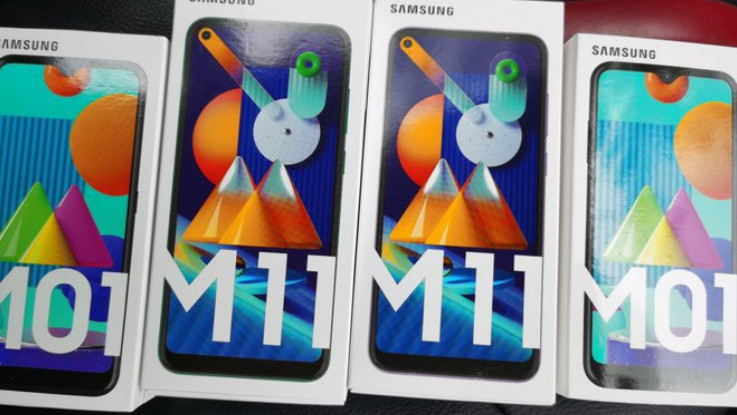 The retailer has also shared the image of the retail boxes of Galaxy M01 and Galaxy M11. As per the image, the Galaxy M11 will come with a punch-hole design, while the Galaxy M01 will feature a waterdrop notch.

As per a report by IANS, the company is planning to launch both the phones before Galaxy A31. The report highlights that both the phones will be available for purchase from Samsung’s official retail channels along with online platforms. The Samsung Galaxy M01 will be a budget-centric smartphone and it will be priced below Rs 10,000. The phone is said to come with 3GB of RAM and 32GB of internal storage. The phone will be equipped with dual rear cameras and a 4,000mAh battery.

The Galaxy M11 will be available in two memory configurations including a 3GB RAM + 32GB of internal storage and 4GB RAM + 64GB of internal storage. The smartphone is reported to be priced between Rs 10,000 to Rs 15,000. The smartphone is said to feature triple-camera setup along with 5,000mAh battery and Qualcomm Snapdragon processor, reports IANS.

The company has already announced Galaxy M11 in March this year. Samsung Galaxy M11 features a 6.4-inch HD+ Infinity-O LCD display with a screen resolution of 1560 x 720 pixels with a punch-hole at the top left corner of the display. On the back, the Galaxy M11 features a fingerprint sensor. The smartphone is powered by a Qualcomm Snapdragon 450 processor.

On the camera front, the device is loaded with a triple-camera setup with a combination of 13-megapixel primary lens with f/1.8 aperture, a 5-megapixel ultra wide-angle lens with f/2.2 aperture and a 2-megapixel depth sensor. The rear cameras support video recording of up to 1080p. For the front, there is an 8-megapixel selfie shooter with f/2.0 aperture.

The Samsung Galaxy M01 is yet to be announced. As per previous leaks, the Galaxy M01 will be powered by the Qualcomm Snapdragon 439 chipset coupled with 3GB of RAM. Samsung Galaxy M01 will come with a Full HD+ display with a screen resolution of 2340 x 1080 pixels. Furthermore, the smartphone will come with a screen density of 480. It will run Android 10 with Samsung’s One UI 2.0 on top. It will be available in Black, Blue and Red colour options.