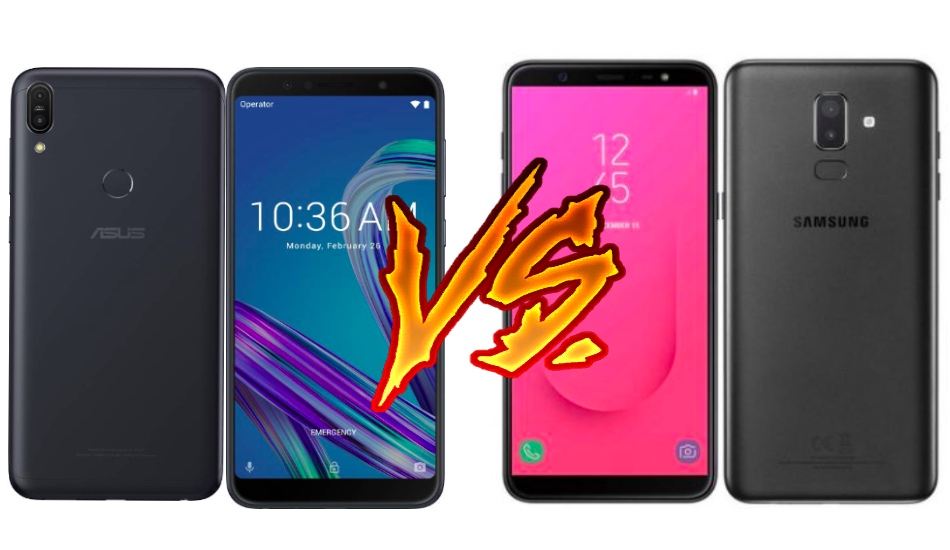 The Galaxy J8 was Samsung’s answer to the rest of the competition in the budget and mid-budget price category. There is no doubt that the smartphone comes loaded with some good cameras. However, it stands nowhere close to the Asus Zenfone Max Pro M1 when it comes to other aspects.

Samsung has recently announced a slewof products in its Galaxy J and Galaxy A-series. Although the Galaxy A6 series is meant to compete with other mid-range devices, the Galaxy J6 and Galaxy J8 are meant for the budget segment. The former comes at a starting price of Rs 13,990, while the latter is priced at Rs 18,990.

The latest move from Samsung is meant to strengthen its budget portfolio and compete with the competition. However, it seems to backfire badly. In our previous comparison, we found that the Galaxy J6 came nowhere near to the Asus Zenfone Max Pro M1. Now, it is time for the Galaxy J8 to enter the fierce battle with the latest champion from Asus. The smartphone comes with a price tag of Rs 12,999 and it has all the arsenal to compete with the higher priced Galaxy J8. So, without further ado, here is the side-by-side comparison of the two.

Samsung has finally brought the latest 18:9 display to its budget-centric smartphones with the Galaxy J6 and Galaxy J8. This means you get a taller-looking smartphone with the display being the major highlight. However, it seems that the brand has settled for a rather low-standard design by giving a cheaper polycarbonate body for that price segment, where the metal design has now become a standard.

On the other hand, with Zenfone Max Pro M1, Asus is trying to give a much sturdier look with metal unibody along with 2.5D curved glass on the front. The smartphone comes with a refined design (check out the pics of Asus Zenfone Max Pro M1) which surely looks better than the tad expensive Galaxy J8.

Coming to the display, the Samsung Galaxy J8 bears a 6-inch HD+ Super AMOLED display with a screen resolution of 1480 x 720 pixels. Once again, giving an HD+ display at a time when most of the competition at this price range and lower are offering Full HD+ display on their smartphones. Not really a smart move Samsung!

The Asus Zenfone Max Pro M1 shines once again with its 6-inch Full HD+ display with a screen resolution of 2160 x 1080 pixels along with 85 percent NTSC colour gamut and 1500:1 contrast ratio. This roughly translates to some vivid display output. Plus the 450 nits brightness ensures that the phone will offer bright screen, which makes it easier to read under direct sunlight. On another hand, the low pixel density count of 274ppi on the Galaxy J8 means that the colour saturation and deep blacks will not be as strong as in Asus Zenfone Max Pro M1, which comes with a pixel density of 402ppi. To conclude, the Asus easily beats the Samsung Galaxy J8 with brighter and better display.

On the hardware side, things do not look good for Samsung as well. The smartphone is powered by an octa-core Qualcomm Snapdragon 450 processor along with Adreno 506 GPU. The phone is backed by a 4GB of RAM and 64GB of internal storage, which can be further expanded up to 256GB via micro SD card slot. Once again, judging by the processor and other specs, the Galaxy J8 looks a tad expensive model as one can get the same processor in Xiaomi Redmi 5, which comes at almost half of its price.

Asus Zenfone Max Pro M1 is powered by the Qualcomm Snapdragon 636 processor along with Adreno 509 GPU. We are comparing the 4GB RAM variant here, that comes with 64GB storage, which performed quite exceptionally in our review. Not only, it is able to manage daily tasks, but also some high-end games like PUBG Mobile and more. At Rs 12,999, the kind of specs of Asus is offering, the Zenfone Max Pro M1 seems to be more value for money option.

Samsung’s latest mid-budget offering runs on Android 8.0 Oreo, which is based on company’s Experience 9.0 UI. The user interface on this smartphone is heavily skinned and we have heard a lot of complaints from Samsung users, especially, those who are using budget devices, that it starts to show the sign of hanging and lagging within first six months of usage. However, generally the user interface of Samsung is said to smooth, but it would be interesting to see whether the phone will be able to deliver some good user experience.

Asus was earlier criticized a lot over its ZenUI interface, which came with an ocean of bloatware and complex user interface. However, with Zenfone Max Pro M1, Asus has taken a completely different approach by implementing near-to-stock experience with minimal bloatware and not-so-heavy customizations. This has actually paved well for the company and resulted in a smartphone that was quick to respond, easy and smooth to operate. Further, the smartphone comes loaded with the latest Android 8.1 Oreo. However, it boils down to consumer preferences as Samsung loyals will go for the Experience UI, while those who want to have near-stock experience, will opt for Zenfone Max Pro. Still, if you ask us then will go for the latter.

Samsung Galaxy J8 sports a dual-camera setup that comes with a combination of the 16-megapixel sensor with f/1.7 aperture and 5-megapixel secondary lens with f/1.9 aperture. For the front, there is a 16-megapixel shooter for selfies and video calling. The Asus Zenfone Max Pro M1 also features dual rear cameras.

is a combination of dual 13 MP (f/2.2, 1.12µm) + 5 MP (f/2.4, 1.12µm) lenses which offers phase detection autofocus, a 5 element lens, and a wide-angle 80-degree lens. There’s also an 85.5-degree wide angle 8-megapixel front snapper with an aperture of /2.2 aperture. This is where Samsung takes the lead as it comes with better camera configuration in terms of providing larger aperture and more megapixel count. This also means that the Galaxy J8’s camera could do a good job in capturing photos in low-light and selfies will surely come out to be better as compared to Asus Zenfone Max Pro M1.

Asus packaged the Zenfone Max Pro M1 as all-rounder device. The phone not only comes loaded with some impressive specifications, but it offers some really good battery backup and youcan thank to the massive 5,000mAh battery. During our testing, we found out that the phone delivers almost two days of battery backup with moderate use, which is impressive.

The Samsung Galaxy J8 features a 3,500mAh battery, which could ideally last a day of backup. You are getting 1500mAh more battery while paying Rs 5,991 less. We guess you already the winner, don’t you!

The Galaxy J8 was Samsung’s answer to the rest of the competition in the budget and mid-budget price category. There is no doubt that the smartphone comes loaded with some good cameras. However, it stands nowhere close to the Asus Zenfone Max Pro M1. Whether be it design, display, hardware, software or battery backup, the Galaxy J8 totally feels like an underdog in all regards.