The device will be powered by Android 6.0 Marshmallow operating system.

Samsung launched the Galaxy J5 (2016) in India last year and the South Korean giant now seems to be working on its successor, which is named as Samsung Galaxy J5 (2017) after the phone received WiFi certification from the WiFi Alliance (WFA).

As per the Wi-Fi certification, the Samsung Galaxy J5 (2017) will support dual-band Wi-Fi a/b/g/n (2.4GHz and 5GHz) and Wi-Fi Direct connectivity features. Sadly, the listing shows that the device will be powered by Android 6.0 Marshmallow operating system. The listing also reveals that the smartphone boasts the model number as SM-J530FM/DS with the certification ID WFA70158 and the date of certification being 15th February 2017. Apart from this, no other details of the Samsung Galaxy J5 (2017) are known at the moment. However, since the device has started hovering over the rumour world, we expect more details to surface online soon. 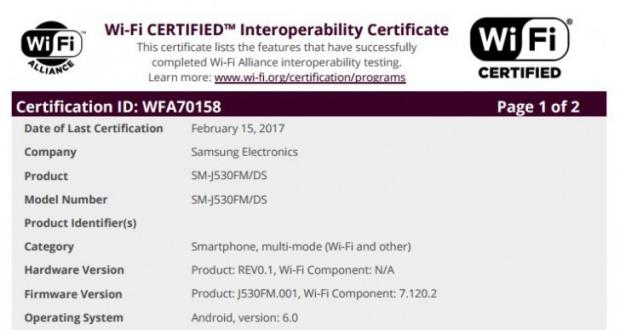