Samsung Galaxy A50 surfaces with 6GB RAM and Android Pie

Samsung Galaxy A50 might come with an Exynos 9610 chipset which belongs to the Exynos 7 series.

After receiving WiFi certification from the WiFi Alliance (WFA) recently, Samsung Galaxy A50 has now been spotted on Geekbench, benchmarking website revealing a few key specs.

As per the GeekBench listing, Samsung Galaxy A50 might come with an Exynos 9610 chipset which belongs to the Exynos 7 series. The chipset comes with a 10nm process with clock speeds up to 2.3GHz. 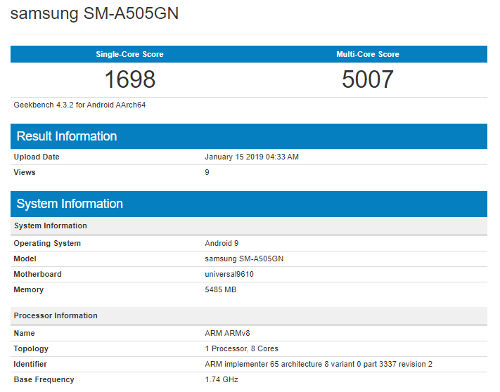 The listing also reveals that the phone will have a 6GB variant and it will run on the latest Android Pie out of the box. A 4GB variant was earlier spotted on the same Geekbench website in December last year. This time the phone has scored 1693 and 5031 points in the single and multi tests respectively.

Past rumours say that the Galaxy A50 will feature an impressive 4000mAh battery with wireless charging support as well. The phone is also said to feature an in-display fingerprint sensor and it will reportedly come with new Infinity display with a punch hole design. The phone will be available in 64GB and 128GB of storage options and will reportedly have a 24-megapixel camera module

Apart from Samsung Galaxy A50, Samsung is also said to be working on Galaxy A90. Samsung Galaxy A90 smartphone will be available in Black, Silver and Gold colour options and it will come with 128GB of internal storage. The phone could sport a 6GB of RAM or 8GB of RAM as well.