Samsung seems to be working on a new A-series smartphone as a new device which is expected to be named as Galaxy A50 has been spotted on the GeekBenchmark website.

The Samsung Galaxy A50 is listed by the model name SM-A505FN in the listing and it reveals quite a few specs features of the upcoming smartphone. The smartphone is expected to be the successor of Galaxy A5.

As per the GeekBench listing, the Samsung Galaxy A50 will be to be powered by Samsung’s mid-range Exynos 9610 chipset under the hood. The processor is further accompanied by 4GB of RAM. On the software front, the smartphone is seen running the latest Android 9 Pie update. The Galaxy A50 has scored 1,615 points in single-core test and while in multi-core score test, it scored 4,380 points. 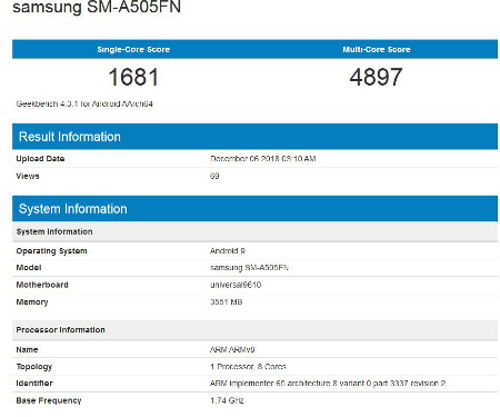 The Exynos 9610 was announced in March this year. It is a 10nm octa-core chipset with four Cortex-A73 cores clocked at 2.3GHz and four Cortex-A53 cores clocked at 1.6GHz. It supports 4K recording at 120 frames per seconds as well as slow-motion video recording at 480fps. For the graphics, the phone will feature Mali-G72 MP3 GPU. The chipset is expected to power at least a few mid-range Galaxy smartphones next year.

As of now, nothing much is known about the upcoming Samsung Galaxy A50. It is expected that Samsung will announce the Galaxy A50 early next year. Samsung will be unveiling its first Galaxy smartphone with an Infinity-O display this month in China.