Samsung Galaxy A50 will be powered by Android 9.0 Pie operating system.

Samsung is working on a new smartphone in its mid-range Galaxy A-series, dubbed as Galaxy A50. Now the Samsung Galaxy A50 has received WiFi certification from the WiFi Alliance (WFA).

The Wi-Fi certification, first spotted by Nashville Chatterclass, reveals that the Samsung Galaxy A50 will support dual-band Wi-Fi a/b/g/n (2.4GHz, 5GHz) and LTE capabilities. Sadly, the listing does not show any specifications except that the device will be powered by Android 9.0 Pie operating system. The listing carries the certification ID WFA81317 and the date of certification being 14th January 2019. 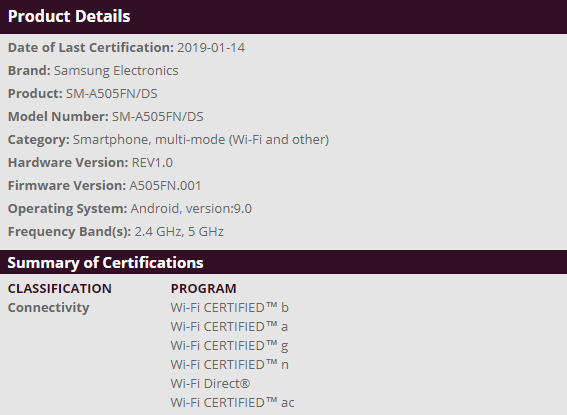 As per a recent report, the Galaxy A50 will feature an impressive 4000mAh battery with wireless charging support as well. The phone is also said to feature an in-display fingerprint sensor. Apart from that, the phone is reported to come loaded with new Infinity display with a punch hole design and it will be available in 64GB and 128GB of storage options.

Earlier, the Samsung Galaxy A50 was spotted on theGeekbench website. As per the listing, the smartphone will be powered by Samsung’s mid-range Exynos 9610 chipset. The processor is further accompanied by 4GB of RAM. On the software front, the smartphone is seen running the latest Android 9 Pie update.