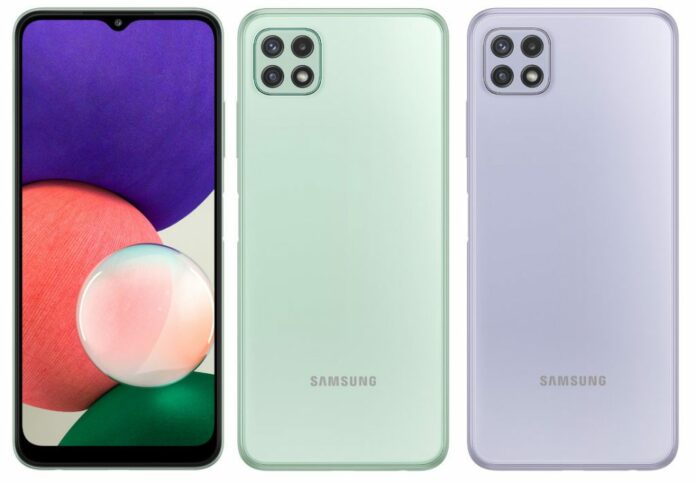 Samsung announced the Galaxy A22 5G and Galaxy A22 4G handsets in Europe earlier this month.

It seems Samsung is looking forward to launching a new smartphone in its Galaxy A series soon. The device is named Samsung Galaxy A22 5G, and its India support page has now gone live on the Samsung website. To recall, Samsung announced the Galaxy A22 5G and Galaxy A22 4G handsets in Europe earlier this month.

As per Samsung India’s support page, the Galaxy A22 5G is listed with model number SM-A226B/DS. The DS in the model number suggests dual sim support. However, the listing (via. Pricebaba) does not reveal anything about the upcoming Samsung smartphone, but it suggests that the phone may soon be making its debut in India.

The Galaxy A22 5G with the same SM-A226B/DS model was also spotted at the Bureau of Indian Standards (BIS). This also hints is launch in India soon.

Samsung Galaxy A22 5G features a Full HD+ 6.6-inch IPS LCD Infinity-V display with 2,400 x 1,080 pixels resolution and a 90Hz refresh rate. Under the hood, the phone is powered by 2.2GHz octa-core MediaTek’s Dimensity 700 processor. It comes with 4GB/6GB/8GB of RAM and 64GB/128GB of storage which can be expanded to 1TB via a microSD card.

A 5,000mAh battery backs the smartphone with support for 15W fast charging. It runs OneUI 3.1 based on Android 11. There’s also a side-mounted fingerprint scanner for security.

On the camera front, the Samsung Galaxy A22 5G sports a triple camera setup with a 48MP primary main camera with f1.8 aperture, a 5MP ultrawide lens with f2.2 aperture, and a 2MP depth sensor with f2.4 aperture. It has a front camera of 8-megapixel for selfies.