Samsung is expected to bring 9 smartphones under its mid-range Galaxy A series ranging from Galaxy A10 to Galaxy A90.

The Samsung Galaxy A10 is listed on Geekbench with the model number SM-A105F. As per the GeekBench listing, Samsung Galaxy A10 comes with Android 9.0 Pie out-of-the-box and has 2GB of RAM. It will be powered by an octa-core Samsung’s Exynos 7885 SoC, the clock speed is lower than the usual. The phone has scored 1103 points in the single-core test while in the multi-core test, the phone has received 3324 points. 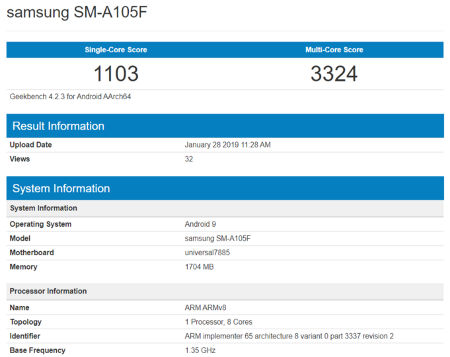 According to a report by SamMobile, the phone might likely to be running the recently launched Exynos 7904 processor. The specs listed in the listing indicates that this could be the company’s entry-level phone. Samsung Galaxy A10 is likely to be the most affordable device in this year’s Galaxy A-Series.

It is not known yet that when Samsung will be launching its new Galaxy A range of handsets, they could possibly launch at Mobile World Congress next month. Meanwhile Samsung is all set to launch its flagship Galaxy S10 series and the Galaxy F foldable smartphone at the Bill Graham Civic Auditorium in San Francisco on February 20.