Samsung and iQOO have launched new smartphones, including the Samsung Galaxy A04e and iQOO Neo 7, respectively. 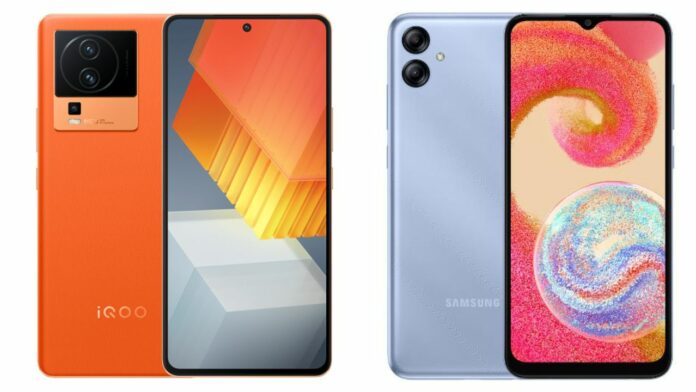 Samsung and iQOO have launched new smartphones including the Galaxy A04e, and the iQOO Neo 7, respectively. While the former is a budget offering with a big 5000mAh battery, the latter is one of the most high-end smartphones being offered from iQOO, being packed with a Dimensity 9000+ processor.

The smartphone has a 6.5-inch HD+ IPS LCD display with a waterdrop notch, and a 60Hz refresh rate. It packs an unspecified octa-core SoC which is reportedly the Helio G35 but Samsung hasn’t confirmed it yet. It is paired with up to 4GB of RAM, and up to 128GB of inbuilt storage. The storage is expandable via a microSD card.

In addition, the device is backed up by 5,000mAh battery. The device supports 10W standaed charging. Further, the device doesn’t seem to have a fingerprint sensor but there should be support for face unlock.

In addition, it includes connectivity features such as dual-SIM support, 4G VoLTE, Wi-Fi 802.11ac, Bluetooth 5.0, GPS, and a USB-C port. The device runs on Android 12 based OneUI Core 4.1.

It packs up to 12GB LPDDR5 RAM and up to 512GB of UFS 3.1 inbuilt storage. There is also a vapour chamber cooling system for heat dissipation. For optics, the iQOO device packs a triple rear camera setup including a 50-megapixel f/1.9 primary sensor, an 8-megapixel f/2.2 ultra-wide lens and a 2-megapixel f/2.4 macro sensor. For selfies and video calls, the handset features a 16-megapixel f/2.5 camera on the front.

The smartphone is backed by a 5000mAh battery with 120W fast charging support. Further, it boots Android 12-based Origin OS Ocean. For connectivity, you get dual-SIM 5G, Wi-Fi 6, Bluetooth 5.3, GPS, NFC, and a USB-C port for charging the handset. It also has an under-display fingerprint sensor, X-Axis linear vibration motor, and stereo speakers.