The Samsung Galaxy A03s specifications have now been tipped as per which it will come with an HD+ display, up to 6GB of RAM and 128GB of storage. 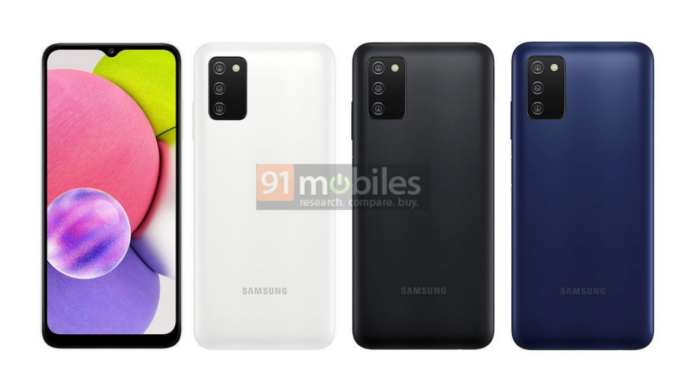 The Samsung Galaxy A03s specifications have now been tipped ahead of launch. It has been in the news since May and has been leaked previously, but a detailed leak has now arrived. As per the latest report, the device will have an HD+ TFT Infinity-V display.

The latest leak comes from 91Mobiles in collaboration with tipster Ishan Agarwal. The information suggests the smartphone will have a 6.5-inch HD+ (720×1600) TFT Infinity-V display. It will have 269 PPI and 16 million colours. The phone is powered by a 2.3GHz octa-core processor as per the tipster.

However, the exact model of the processor was revealed a few days ago via a Google Play Listing to be the MediaTek Helio P35. The phone should come with 6GB RAM and 128GB internal storage. Further, there will be a triple camera setup at the back.

This setup comprises of a 13MP primary camera, a 2MP macro lens, and a 2MP depth sensor. At the front, the phone gets a 5MP camera for selfies and video calls. It will most likely pack a 5000mAh battery for which the charging wattage hasn’t been mentioned. The renders suggest the phone will be available in White, Black, and Blue colour options.

A previous leak revealed that the upcoming Samsung Galaxy A03s price will be EUR 150 (approx. Rs 13,100) in Europe. Moreover, it will come in a 3GB RAM + 32GB storage option as well. There’s no official confirmation from Samsung regarding where the device will launch and at what price. Samsung Galaxy A03s support page was also spotted live on the Samsung India website earlier.