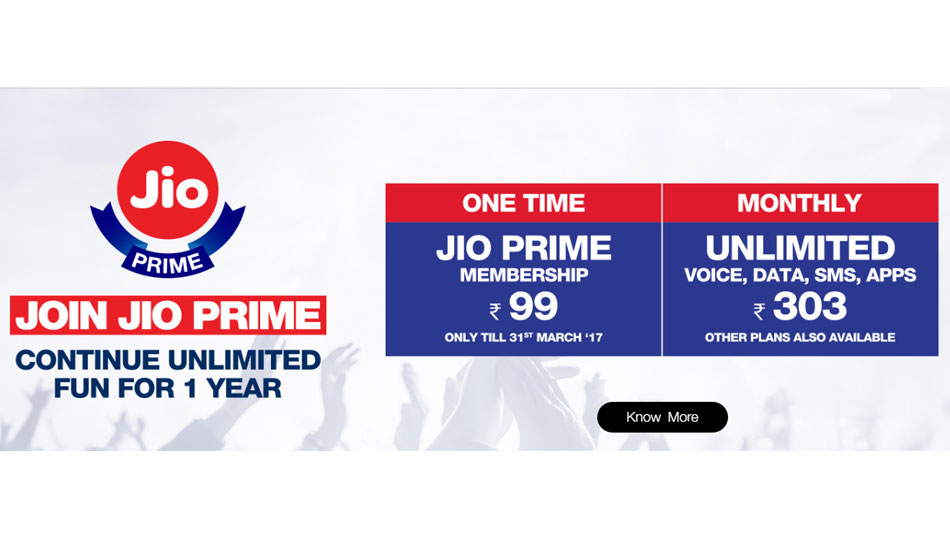 Subscribing to Jio Prime membership will enable you to enjoy the current Happy New Year offer benefits for another one year starting from April 1st this year.

As announced by Mukesh Ambani last month, Reliance Jio has kickstarted its subscription process from today i.e. March 1st, 2017. The most important of all is the Jio Prime membership, subscribing to which will enable you to enjoy the current Happy New Year offer benefits for another one year starting from April 1st this year. As of now, the Jio Prime membership can be availed by paying a subsidised entry fee of Rs 99 which would then give you all the benefits including free unlimited calls and SMS along with 1GB of daily 4G data for Rs 303 per month. Reliance Jio took the Indian telecom sector by storm after it became official in September back in 2017. Mukesh Ambani recently confirmed that the telecom operator has already crossed its 100 million user base target and plans to further hike up the user base in future.

To explain the promotional period starting today and ending on March 31st, all the current Jio users can avail the Jio Prime membership for just Rs 99 (entry fee) which is expected to go up after March 31st. In other words, if you want to continue avail all the benefits from Happy New Year offer, a current Jio user can do so by subscribing to Jio Prime membership. Apart from this, Reliance Jio will also offer complimentary access to Jio Media Services that include JioTV, JioCinema, JioMusic, JioMags and JioExpressNews. Breaking down the benefits, under Jio Prime membership, for at least next one year, users will be able to get technically 30GB (with a daily cap of 1GB) of data for Rs 303 per month. In order to subscribe to Jio Prime membership, one can download the MyJio app or Jio.com or visit the nearest Reliance Digital or Jio Retail Store.

Meanwhile, another report claims that Reliance Jio will offer two additional packs for subscription apart from the Jio Prime membership. The first one is priced at Rs 149 which will offer unlimited free calls and SMS along with 2GB of data for one month without any daily limit. For the non-prime users, this pack will offer only 1GB of 4G data starting 1st April. On the other hand, the second pack is priced at Rs 499 which will offer 58GB of 4G data along with free unlimited calls and SMS. However, we do get a 2GB daily limit on this plan.

Interestingly, the Rs 499 pack gives you almost double the data when compared to the Happy New Year offer with other benefits being same. However, for the non-prime members, this pack will only offer 5GB of 4G data with a daily cap of 2GB data.

Well, Jio Prime membership does offer some attractive offers when compared to non-prime members, however, is it reliable enough to induce people to subscribe to its plans? Although the internet speed has been significantly reduced over time and Reliance has also practise data throttling every now and then, the call drops still exists. After 6 months of existence in the telecom sector and various disputes with Airtel, Vodafone regarding interconnection points, Jio still struggles in terms of the trust. Most of the people still use a Jio SIM as their secondary SIM for data and will the 100 million user base willing to spend money for these services starting next month? Only time will tell. Till then let us know your thoughts, in the comment section below. Will you subscribe to Jio Prime membership?