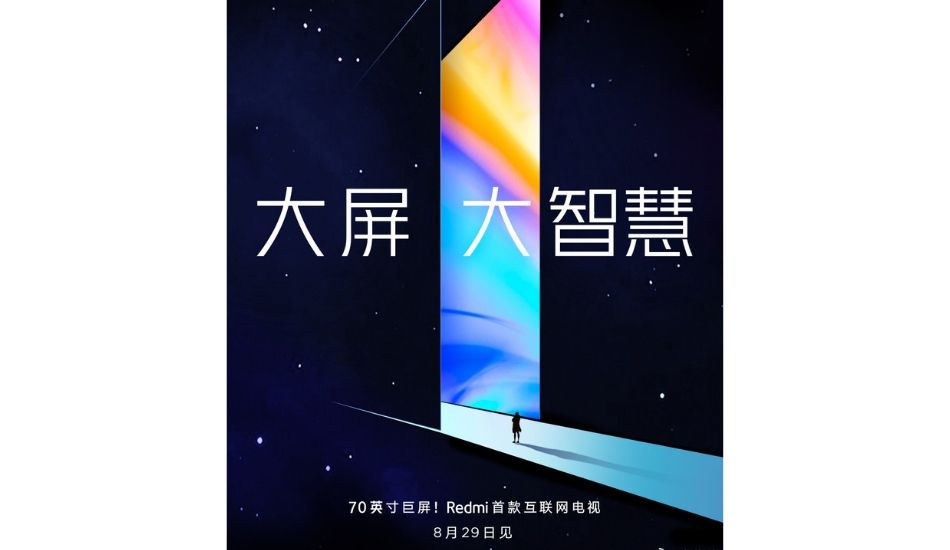 On Friday, Head of Xiaomi TV has officially confirmed through its official Weibo account, that Redmi TV will make a debut soon, now in a new development, Xiaomi founder, Chairman and CEO, Lei Jun has confirmed the launch date of Redmi TV through its official Weibo account. As per the post, the first-ever Redmi TV will have huge 70-inches screen and will be launched in China on August 29th.

The post reads “Redmi red rice TV is a 70-inch giant screen, it is amazing! Released on August 29!”

Last month, Redmi TV was found listed on the 3C certification website with the model number L70M5-RA. As per earlier listing and reports, the upcoming Redmi TV is being manufactured by TPV Technology (Xiamen) Co., Ltd on behalf of Redmi. Further, it will be launched in two sizes, 40 inches and 70 inches, in which 70 inches TV is now been confirmed by the company’s top management as well. However, as of now, there is no word on 40-inches TV. Further, both the sizes are expected to offer 4K UHD resolution. This Smart TV will most likely to have Xiaomi’s PatchWall system and other features like Dolby Audio and a Bluetooth voice remote.

In the case of Xiaomi Mi TV, it has managed to grab the big chunk of the market share of Smart TVs in India, so it would not take too long when Redmi TV will make its way to the Indian markets as well.

Recently, Vikas Agarwal, in conversation The Mobile Indian, confirmed that the OnePlus TV getting ready and will be launched in India soon. In another development, Honor confirmed to launch ‘Honor Smart Screen’ TV soon and Honor India President, Charles Peng has even confirmed in an interview with PTI, that the company will soon be launching its smart TV in India along with Honor 9X and 9X Pro smartphones.