Redmi Smart Band Pro has now been tipped to launch in China alongside the Redmi Note 11 series on October 28. 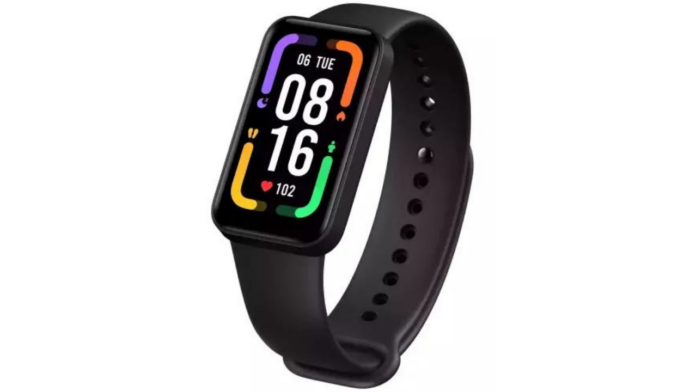 Redmi is all set to launch the Redmi Note 11 series and the Redmi Watch 2 on October 28 in China. However, reports have started to emerge that suggest Redmi will also be launching a smart fitness band during the Redmi Smart Band Pro event.

The report comes from German Publication Winfuture.de, who has leaked the renders of the Smart Band Pro by Redmi. Further, the report states that the band will launch on October 28 in China. Additionally, it will go on sale in Europe and Germany at a later date.

The renders shared by the publication show that the Smart Band Pro will have a big rectangular display along with silicone straps. It should have plastic housing with a flat frame. In addition, it should have pogo pins at the back through which the band will charge. Further, the silicone straps are said to come with an interchangeable mechanical system so the user can apply their choice of band.

Apart from the Smart Band Pro, we will also witness the arrival of the Redmi Watch 2. The watch has been confirmed to feature an AMOLED display. It should be having a 1.6-inch display compared to that of the 1.4-inch panel on the previous generation of Redmi Watch. This bigger AMOLED panel should help in better brightness, improved battery life and deeper black levels.

As for the Redmi Note 11 series, the Pro and Pro+ models have been confirmed to feature 108-megapixel sensors. The vanilla Note 11, on the other hand, will feature a dual-camera system with 50-megapixel and 2-megapixel sensors. In addition, the Pro+ model will also get 120W fast charging along with multi-function NFC, Bluetooth v5.2, X-axis linear motor and Wi-Fi 6 support. Moreover, the series has also been confirmed to come with a 3.5mm headphone jack.