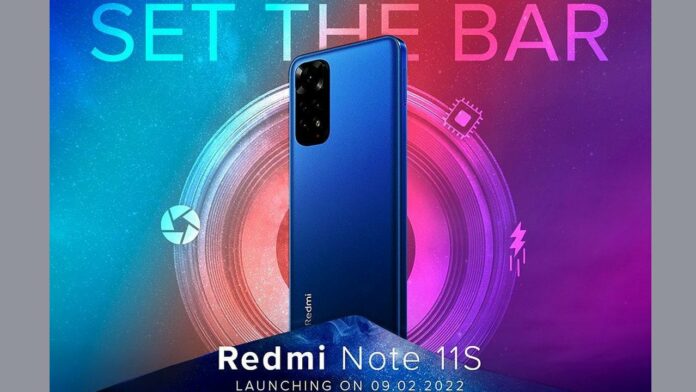 Xiaomi has today confirmed the Redmi Note 11S launch date in India. The brand will launch the upcoming Redmi Note 11 series smartphone in India on February 9.

As per the teaser shared by the company, Redmi Note 11S will launch in a Blue colour option. The device has a quad-camera setup on the back with the LED flash housed inside.

However, the company has not confirmed any spec details of the upcoming Redmi series smartphone. The smartphone’s launch in India had been teased last week. It will be available on Amazon India after launch.

As per rumours, the Note 11S will come with a 6.43-inch AMOLED display with a 90Hz refresh rate. It will have a side-mounted fingerprint scanner.

The Redmi Note 11S has appeared on multiple certification websites in the past, including BIS, FCC and more. The FCC listing confirms the model numbers which are 2201117TY and 2201117SY. The listing also says that the phone will run MIUI 13 out of the box. Moreover, three memory options are listed, including 6GB/64GB, 6GB/128GB, and 8GB/128GB.

Past reports suggest that the Redmi Note 11S will come with a MediaTek chipset and should support 5G as well. Further, it can have a 108-megapixel Samsung HM2 sensor, an 8-megapixel Sony IMX355 ultra-wide sensor, and a 2-megapixel OV2A OmniVision macro sensor. At the front, it may get a 13-megapixel camera for selfies.

Apart from this, Redmi is rumoured to be working on a Redmi 10 2022 edition smartphone. The phone has surfaced before via a few leaks. Redmi 10 2022 should come with a centrally aligned punch-hole display. It should be powered by a MediaTek SoC.