Along with the Realme X, the company is also likely to launch Realme X Youth Edition (aka Realme X Lite) on the same day i.e May 15.

Realme is all set to launch Realme X with a pop-up selfie camera on May 15. Now ahead of the launch, the phone has been spotted on GeekBench benchmarking website revealing quite a few of its specifications.

As per the GeekBench listing, the Realme phone has model number RMX1901. The phone will be powered by Qualcomm Snapdragon 710 processor with 1.71 GHz clocking speed. It will have 8GB of RAM. 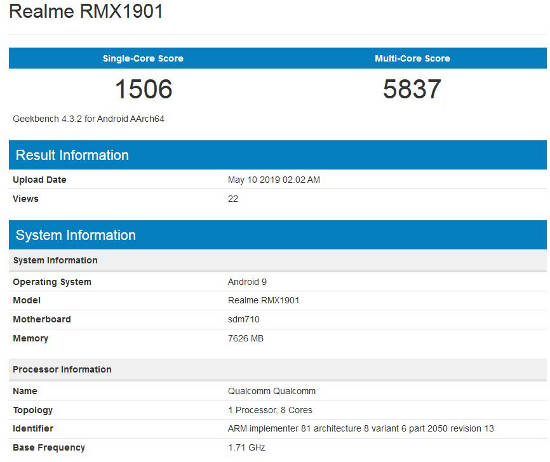 Further, the GeekBench listing reveals that the Realme X will run on Android 9 operating system out-of-the-box. The phone has scored 1506 and 5837 in the single-core and multi-core test respectively.

Along with the Realme X, the company is also likely to launch Realme X Youth Edition (aka Realme X Lite) on the same day i.e May 15. This phone is said to be the same Realme 3 Pro which was launched in India some time back.

As per the recent TENAA listing, the Realme X (RMX1901) features a 6.5-inch AMOLED notch-less display with 1080 x 2340 pixels resolution. The phone features an in display fingerprint sensor as well. It is powered by 2.2 GHz octa-core processor coupled with 4GB RAM and 64GB of internal storage

The smartphone measures 161.2 x 76 x 9.4mm weighs 191 grams. It runs Android 9 Pie operating system based ColorOS 6.0 UI and it is backed by a 3,680mAh battery. For optics, the TENAA listing shows that the phone is equipped with a dual camera setup of 48-megapixel and 5-megapixel sensors. It will have a pop-up selfie camera of 16-megapixel. The phone will come in two colours - Black-Blue and White, the listing suggests.

Realme X teased by CMO ahead of May 15 launch