Realme is adding a number of phones to its C series of smartphone lineup internationally. While there’s no information if this smartphone will make its way to India, the company is launching a new phone called Realme C25 in Indonesia on 23rd of March.

The launch event will take place in Indonesia and will be streamed live on the company’s official YouTube channel starting 1:30PM WIB (12p.m. IST). 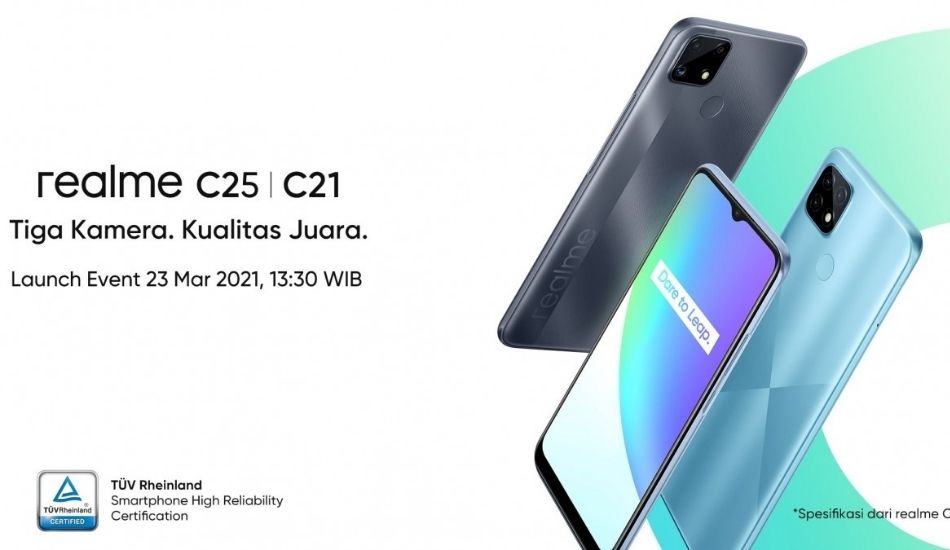 The web page for the Realme C25 also reveals the specifications for the phone which say it will sport a 6.5-inch display with a waterdrop notch for the 8MP selfie camera. The smartphone will be powered by the MediaTek Helio G70.

There’s no information on how much RAM and storage the phone will come equipped with. Although, we do know it will feature a 48MP triple camera on the back accompanied by a fingerprint scanner and will pack a 6,000 mAh battery with 18W charging speeds.

The company recently launched the Realme C21 in Malaysia which will also join the Realme C25 launch in Indonesia. Realme C21 features a 6.52-inch HD+ display with 720 x 1600 pixels resolution, 89.5 percent screen-to-body ratio and a 20:9 aspect ratio. There is a teardrop notch on the screen to house a 5-megapixel front camera.

The Realme C21 is powered by the MediaTek Helio G35 SoC processor with 3 GB of RAM, 32 GB of internal storage. It is backed by a 5,000mAh battery and has a 13MP triple camera setup.

In related news to Realme, the company is launching Realme 8 and Realme 8 Pro in India on March 24. Ahead of the launch, Realme announced Infinity sale of its Realme 8 series, starting from March 15, 12:00 pm to March 22, 23:59 pm on Flipkart.com and Realme.com.

Users can pre-book the Realme 8 and Realme 8 Pro with an advance payment of Rs 1080 and also avail exciting gifts and offers during the purchase journey.