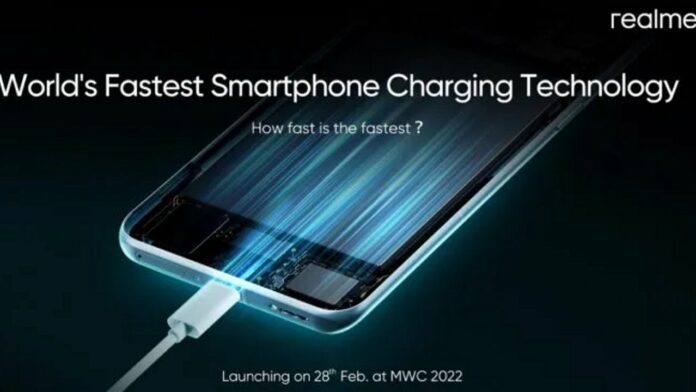 Realme has confirmed to introduce world’s fastest smartphone charging technology at its MWC 2022 event. The company has already confirmed the global launch of the realme GT 2 Pro on February 28.

“Realme’s fast charging technology is ahead of the curve and among the best, when compared to similar devices in the same segment. Under its ‘Go Premium’ strategy, Realme will invest 70 per cent of R&D resources in introducing breakthrough innovation, of which fast-charging technology is a key component. Realme believes the new charging technology will break current barriers and will enable users to charge their smartphones in a much shorter period of time,” Realme said in its announcement.

The Realme MWC event on February 28th starts at 10AM CET (2:30 PM IST) in Barcelona. To refresh, Realme 125W flash charge was introduced in 2021. Now as per rumours, the company will introduce 150W fast charging tech. This will be based on Oppo’s 160W fast charging tech at the MWC.

Xiaomi showed off its 200W fast charging tech last year that charges from 0-100% in 8 minutes. With Realme claiming that it is the “world’s fastest”, we expect it should take lesser time than the 8 minutes that Xiaomi is taking.

Meanwhile, Realme has also announced to launch Realme Narzo 50 under its Narzo series. This new smartphone will be launched on February 24 in India. The smartphone is tipped to cost Rs 15,999 for the 4GB + 64GB storage. The 6GB + 128GB storage variant will come at Rs 17,999. The smartphone could be launched in Speed Black and Speed Blue colour options.  Further, it will be available on Amazon for purchase.