Realme has announced the launch date for its Narzo 50 smartphone in India which is set for February 24. 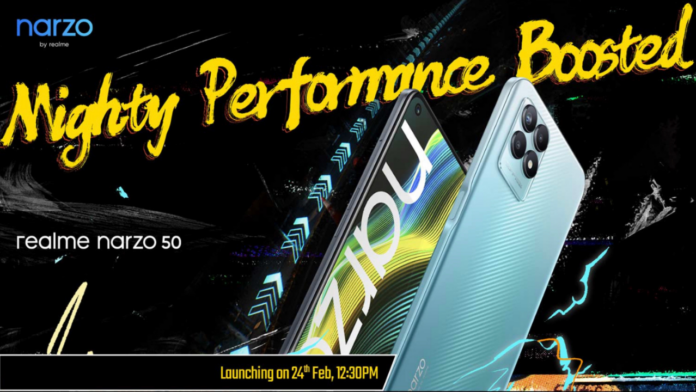 Realme’ Narzo series has been the ideal choice for many in the mid-range and the budget segment. The company started teasing the launch of the Narzo 50 last week in India and it seems like its ready to unveil it on February 24 in the country. Further, it will be available on Amazon for purchase.

The launch date was revealed by the Amazon India website via a listing which states that the Narzo 50 will launch on February 24 at 12:30 PM IST. While the company is yet to officially announce the price of the Realme Narzo 50, the smartphone is tipped to cost Rs 15,999 for the 4GB + 64GB storage trim and Rs 17,999 for the 6GB + 128GB storage variant. The smartphone could be launched in Speed Black and Speed Blue colour options.

The device is speculated to sport a 6.6-inch Full-HD+ IPS LCD display with 120Hz refresh rate. A microsite has already confirmed that it will powered by a MediaTek Helio G96 SoC under the hood. It will reportedly be equipped with up to 6GB of LPDDR4X RAM. It could come with up to 128GB storage along with support for MicroSD card storage expansion.

On the camera front, the Realme Narzo 50 is supposed to feature a triple camera setup, with a 50-megapixel primary camera, a 2-megapixel monochrome sensor and a 2-megapixel macro camera.

On the front, it should come with a 16-megapixel front-facing camera for selfies. The smartphone is also tipped to pack a 5,000mAh battery, with 30W fast charging support. The official specifications and pricing details are yet to be announced by the company.