Xiaomi and Realme are now competing in the tablet space as well. Which one would be a better pick? 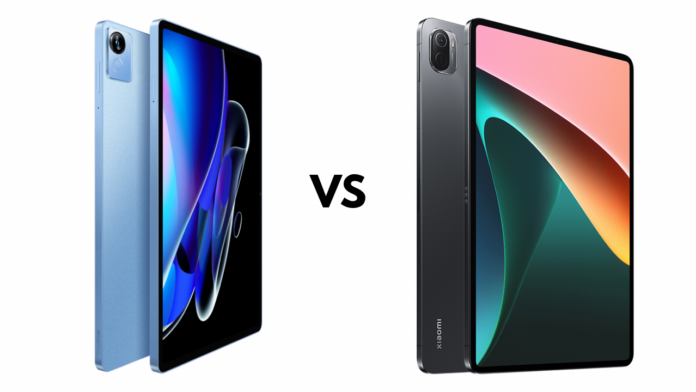 Realme has announced its Pad X tablet in India, and it looks like a compelling purchase unless you rope in its competitors, such as the Xiaomi Pad 5. While the Xiaomi Pad 5 received a lot of praise from the industry and the consumers, can the Realme Pad X beat it and be the ultimate alternative? Let’s have a look where we compare both the mid-range tablets and pick the better one out of the two.

Both the tablets borrow the same design language from the smartphones made by Realme and Xiaomi. In comparison, we feel the Xiaomi Pad 5 looks sleeker and more stylish in terms of design when compared to the Realme Pad X. The Pad X doesn’t look bad by any means, but a slight glass touch to the camera module of the Xiaomi Pad 5 makes it look better.

The display on the front of a tablet is the place where all the magic happens. This big screen should provide an immersive experience so that the user enjoys the content he/she is watching. The Xiaomi Pad 5 features an 11-inch WQHD+ (1,600×2,560 pixel) TrueTone display with a 120Hz refresh rate, 16:10 aspect ratio, Dolby Vision and HDR10 support.

The Realme Pad X sports an 11-inch LCD display with a 2K resolution. The panel supports sunlight mode and a TÜV Rheinland-certified hardware-level blue light filter. Further, the screen has 450 nits of peak brightness with 84.6% of screen-to-body ratio.

Both of these are LCD panels but the panel on the Xiaomi Pad 5 is better in most aspects. Most of all, the display of the Pad 5 has a 120Hz refresh rate while the Pad X has a standard 60Hz refresh rate which might be a deal breaker for many, including myself. However, we have reviewed the Xiaomi Pad 5 and the 120Hz panel definitely makes a substantial difference in the usage experience. Moreover, the Pad 5 has a slightly higher resolution, meaning the content looks sharper.

The Realme Pad X is powered by the Snapdragon 695 chipset paired with up to 6GB of RAM and up to 128GB of storage. In addition, the device supports virtual RAM expansion up to 5GB and internal storage expandable up to 512GB using a microSD card. The Xiaomi Pad 5 is powered by a Qualcomm Snapdragon 860 SoC, paired with 6GB of RAM. Further, the Xiaomi Pad 5 comes with up to 256GB of onboard storage.

Now, the Xiaomi Pad 5 has 6GB RAM as standard, while the Realme Pad X also has a 4GB RAM model. However, the Pad 5 has a 256GB storage model, which isn’t available on Pad X. The latter makes up for it by offering support for MicroSD card expansion up to 512GB compared to 256GB on Pad 5.

But, the more the amount of storage, the higher the price of the SD card. This means you’ll have to shell out close to Rs 5,000 for a good microSD card which ultimately adds to the final cost of the tablet. So a higher amount of in-built storage is always better and we’ll give it to Xiaomi Pad 5.

As for software, it boils down to personal preference as to what the user prefers between Realme UI for Pad or MIUI for Pad. The Realme Pad X has the edge over the Pad 5 because it comes with Android 12-based software compared to Android 11 on Xiaomi’s tablet. On the other hand, the Xiaomi Pad 5 has many tricks up its sleeves, and the Snapdragon 860 processor doesn’t hesitate to keep up with almost every task you throw at it, including graphics-heavy gaming. When we reviewed the tablet, we loved how smoothly it performed.

The same should be the case with Pad X in daily usage, but with Snapdragon 695 under the hood, the tablet might not be able to handle the heaviest of games at high graphics such as Call of Duty Mobile Apex Legends, etc. Moreover, Snapdragon 860 is a flagship SoC compared to Snapdragon 695, which is a mid-ranger. So we’ll have to give this to Xiaomi Pad 5 again as it is just a better choice.

As for cameras, one may not go out shooting pictures with the tablet, so the rear camera does not play a significant role in the overall experience. However, the front one does because most people would attend meetings and chat with friends & family on the tablet.

The Xiaomi Pad 5 has a 13-megapixel camera sensor at the back and an LED flash. Further, there is an 8-megapixel selfie camera at the front with 1080p recording. On the other hand, the Realme Pad X has a 13MP rear camera and an 8MP 105° front-facing front camera for optics.

While we cannot compare the performance of the two, we can claim that the cameras on the Pad 5 get the job done. However, we’ll tie this round based on the on-paper specifications of the sensors.

Next, you get a quad-speaker setup on the Realme Pad X that is powered by Dolby Atmos and supports Hi-res audio. The Pad 5 also comes with quad speakers and supports Dolby Atmos. Further, connectivity options on the Pad 5 include Wi-Fi 5, USB-C, and Bluetooth 5.0, while the Pad X includes Wi-Fi 5, Bluetooth 5.1, USB-C and 5G as well. Again, this may be a deal breaker for many if they want 5G on their tablet, as the Pad 5 doesn’t support it.

Lastly, both the tablets support a Smart Pen accessory that comes with 4096 levels of pressure sensitivity and a 240Hz touch sampling rate. Both of them charge when you attach it to the right side of the tablet. The Xiaomi Smart Pen comes at Rs 5,999, while the Realme pencil comes at Rs 5,499.

Concluding all the above, for a slightly higher price, the Xiaomi Pad 5 outshines Realme Pad X in almost every aspect, excluding the latest software and 5G support. if the latest software and 5G support are what is necessary for you( incidentally, one might have to wait for quite some time before using it as only 5G spectrum auction has been done so far, and service rollout will take time). In that case, the Realme Pad X is the ideal choice. But the overall experience of using a tablet would be much better with the Xiaomi Pad 5, and it is the tablet we would pick between the two.