Realme Pad and Realme Book Slim may come in a new green colour. Though an exact launch date has not been announced by the company. 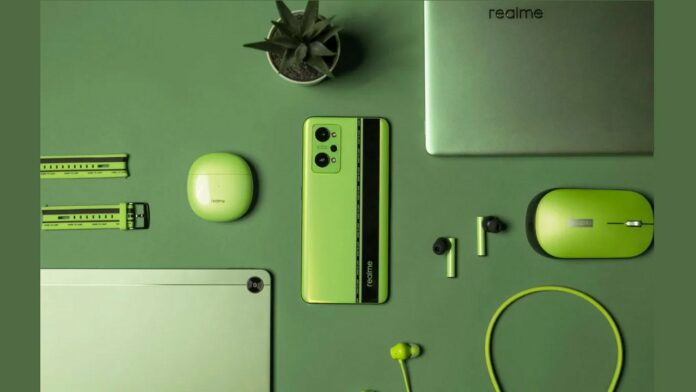 Realme Pad, Realme Book Slim Green colour option has been teased by the company. This means that both of them will be launched in Green colour also in India soon.

Madhav Sheth, VP of Realme, CEO of Realme India, posted an image on Twitter that show the Realme Book (Slim) and Realme Pad’s green colour versions. However, his tweet did not reveal the availability details of the new Green colour option of the two Realme products.

Apart from teasing Realme Pad and Realme Book in green, the image also hints at the arrival of a new smartwatch called the Watch T1 and a mouse in India. For the unknown, Sheth was recently appointed as the President of Realme International Business Group.

Realme Pad sports a 10.4-inch display with 2000 x 1200 pixels resolution. Further, the display will come with a screen-to-body ratio of 82.5 percent. A MediaTek Helio G80 SoC powers the tablet under the hood. The chipset is paired with up to 4GB RAM and 64GB internal storage.

The tablet is equipped with quad speakers for audio. In addition, there will be support for DTS HD and Hi-Res Audio. For the battery, the Realme Pad will pack a 7,100 mAh battery. The tablet will support 18W charging over USB-C.

Realme Book Slim comes with a 14-inch 2K display. It will have a screen resolution of 2160 x 1440 pixels and a peak brightness of 400 nits. The display also gets the blue light certification for less blue light emission. It has a 3:2 aspect ratio and 100 percent sRGB coverage.

Furthermore, the Realme Book Slim is powered by the Intel Core i5-1135G7 mobile processor and the i3-1115G4 processor depending on the option you choose. It is paired with Intel Iris Xe graphics onboard. You get 8GB of LPDDR4x RAM and 256GB / 512GB of PCIe SSD storage.

There is a fingerprint sensor for secure login and a 54Wh battery. It will also support 65W fast charging. The battery is claimed to last up to 11 hours. There is a dual-microphone setup and stereo Harmon Kardon tuned speakers with DTS Surround Sound.