The Realme Narzo 50A Prime will be launching this month in Indonesia. The phone will come with a 6.6-inch display with a Full HD+ resolution. 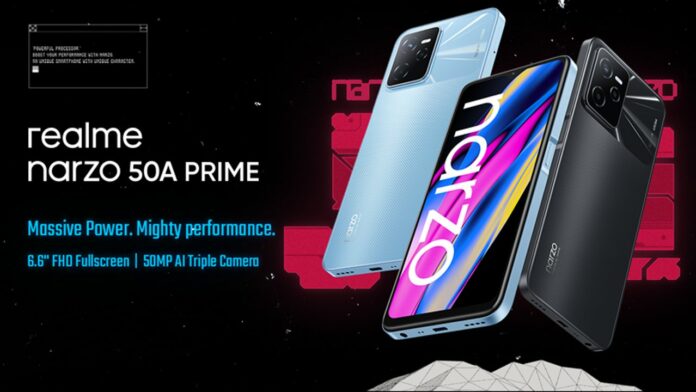 Ahead of the launch, the company has teased the design and some of the key specs of the Narzo 50A Prime. The teaser on the Realme Indonesia website has confirmed that the phone will have a triple-camera setup on the back.

The camera configuration will include a 50MP primary camera sensor. However, the details of the other two sensors are not known. This will reportedly be a 2MP macro camera and a 2MP depth sensor. The LED flash module is also located inside the camera module.

The phone will come with a 6.6-inch display with a Full HD+ resolution. The bottom edge will include 3.5mm headphone jack, the USB Type-C port and the speaker grille. Further, there will be side-mounted fingerprint scanner on the right.

Realme Narzo 50A Prime is also expected to launch in India as well. But Realme has not confirmed the India launch details.

The phone will reportedly come in two storage options – 4GB RAM + 64GB and 4GB RAM + 128GB. Besides, the device will be available in two colour options. This will include Flash Blue and Flash Black colours.

As per earlier leaks, the Narzo 50A Prime is said to pack a 4,800mAh battery with support for a 18W fast charging. Besides, the phone will reportedly run Android 11 out of the box. The smartphone weighs 193 grams. No other information regarding the device is available at the moment.