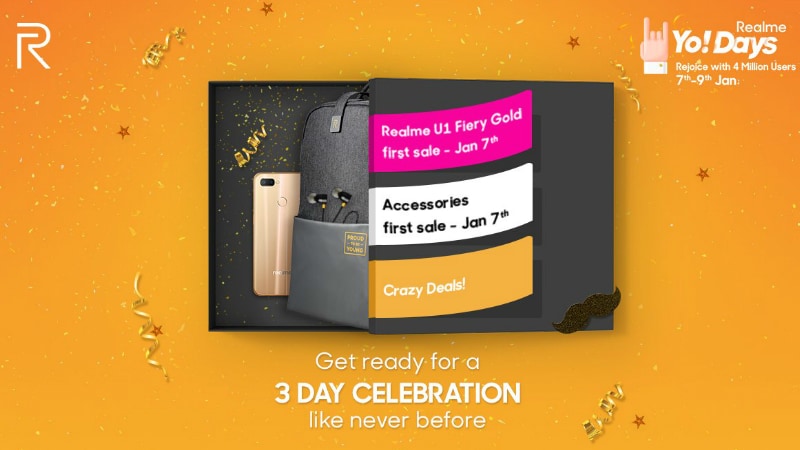 Realme has announced the Realme Yo Days from January 7 to January 9.

As per a tweet from the official company account, Realme hit four million users. The tweet says “A great start to the New Year, we are happy to announce that the Realme Family is now 4 million strong! Thank You for your love. We wish we grow bigger and better in 2019.”

A great start to the New Year, we are happy to announce that the Realme Family is now 4 million strong! Thank You for your love. We wish we grow bigger and better in 2019. Say Yo pic.twitter.com/dsDWbqGctP

Earlier this week, Realme announced that would partner with 20,000 retail outlets in the country to expand its offline sales to 150 cities in 2019. Realme will start with ten cities across the country in January 2019, eventually adding 50 cities every quarter.

In the Realme Yo Days, the company will be hosting Realme U1 Fiery Gold first sale, and also make the Realme Buds and Realme Backpack available to buy. The Realme U1 will be available on both Realme.com and Amazon.in from 7th January to 9th January, 2019 from 12:00 AM.

The first 500 Realme U1 orders will get free Realme Buds for all 3 days, giving away 500 free Realme Buds per day, making it 1500 Realme Buds throughout the sale. Through this campaign, Realme Buds Earphones and Realme Backpack will go on sale for the first time. During the sale, 300 Realme Backpacks will be available in just Rs 1 for three days (7th to 9th January) at 12:00 Noon every day. The backpacks will go on an open sale on 7thJanuary at 12:00 AM Midnight which will be sold at the original price Rs 2,399. Realme 2, Realme C1, Realme U1 and Realme 2 Pro will be all on open sale during the mentioned period.

Madhav Sheth, Chief Executive Officer, Realme India said, “The Realme Yo! Days campaign has been designed to rejoice with our 4 million users. Our users are our brand ambassadors and the elaborate campaign came out as a New Year offering towards our esteemed customers. We are sure to achieve many more milestones this year with the overwhelming response we have been receiving from the customers.”

The company is also said to be working on a budget Realme A1 smartphone whose specs and press renders were leaked online recently. The Realme A1 will be powered by a MediaTek Helio P70 processor paired with either 2GB or 3GB RAM paired with 32GB of internal storage. Realme A1 will be fueled by a massive 4,200mAh battery and it will run Android 8.1 Oreo-based on its customized ColorOS UI. The phone will reportedly feature a primary camera of 13-megapixel sensor and a secondary camera of 2-megapixel sensor paired with LED flash on the rear panel. For the front, the Realme A1 will have an 8 megapixel camera.