Realme has revealed the first look of the Realme GT Master Edition. The phone has been designed by renowned Japanese design master, Naoto Fukasawa. 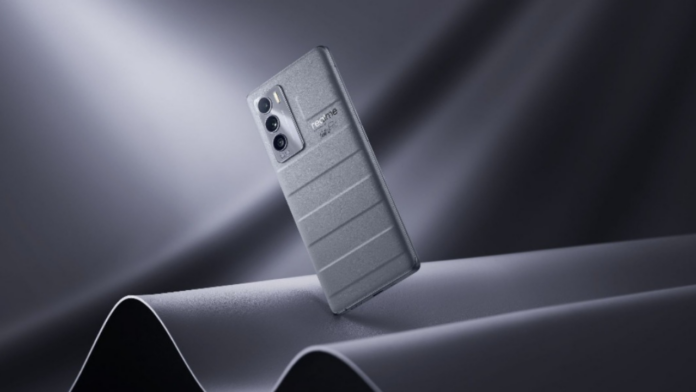 The first look reveals the back cover of the Realme GT Master Edition in a cement gray colour. It adopts the industry’s first 3D vegan leather design with the realme logo placed on the camera’s right side. The smartphone inherits the style of the previous realme Naoto Fukasawa designed Master Edition smartphones.

The upcoming smartphone has been spotted earlier on Geekbench. A 1.80GHz octa-core processor will power the Realme GT Master Edition. The chipset is mentioned as ‘Kona’, which is associated with the Snapdragon 870 SoC. The listing also revealed that it would have 12GB RAM. However, a recently leaked document shows the Snapdragon 778G SoC powers the device. This means the listing could be for the GT Master Exploration Edition.

The leaked document reveals that the Realme GT Master Edition will sport a 6.43″ 120Hz Samsung AMOLED screen with a 360Hz touch sampling rate. In addition, you should get a triple camera setup consisting of 64MP primary, 8MP ultrawide, and 2MP macro sensors. In addition, it may have a punch hole in the upper-left corner for the 32MP selfie camera.

The phone should support 4D game vibration. It should come in two memory options – 8GB/128GB and 8GB/256GB. The phone will support the Dynamic RAM Expansion (DRE) feature that will use the phone’s internal storage to expand RAM. It could sport a 4,300 mAh battery with 65W charging. It will go from 0 to 50% in 12 minutes and fully charge in 32 minutes.