Realme Band 2 launch date has reportedly been set for September 15 in Malaysia. The design of the Realme Band 2 has also been showed off once again. 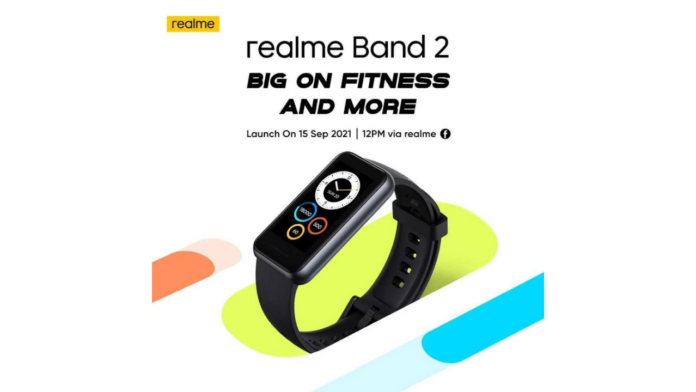 The first renders for the Realme Band 2 appeared back in July and since then, this is the first time we have heard about the device. As per a new report, the Realme Band 2 is set to launch in Malaysia on September 15th. The launch poster also reveals the design of the band.

The poster was first spotted by Gizmochina which states that the Realme Band 2 will launch on September 15, 2021, at 12 pm MYT (9:30am IST). The launch event will be live-streamed via Realme’s Facebook page in Malaysia. As per the poster, the Realme Band 2 has a bigger display than before.

Realme Band 2 may also sport blood oxygen saturation (SpO2) tracking along with a 24/7 heart rate monitor. The report says that Realme Band 2 should also come with a bigger battery as it will now have to power a much bigger display. Moreover, the renders leaked earlier showed that there’s no touch button present at the bottom of the display.

This hints towards software that will completely rely on gestures. The Realme Band 2 renders reveal it will measure approximately 45.9 x 24.6 x 12.1mm as per the report. On the backside of the band, one can observe heart rate monitoring sensors that will provide the respective functionality.

Secondly, the new Realme Band 2 may come with a separate charger this time. This new charger would likely connect with the band through Pogo pins. There’s no official confirmation on when the Realme Band 2 could be launched in regions outside Malaysia.