The Reliance 3G tablet comes with Android 2.3, 512 RAM, 7 inch capacitive display and a 2 MP front and rear camera. It is priced at Rs 12,999 and comes with bundled data offers with up to 33 per cent discount.

Reliance Communications has launched an Android tablet with 3G network support, becoming the first telecom operator in India to do so. 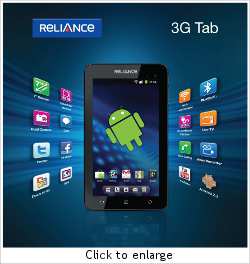 The Reliance 3G Tab, manufactured by ZTE, is based on Android 2.3 featuring a 7 inch capacitive touchscreen. The tablet comes with 512 MB RAM and a microSD external storage, weighing just 389 gram. The tablet also has a 2.0 megapixel rear camera and a front camera.

The tablet will support push email and other Android features like document on the go for editing and viewing documents. Other features include Mobile TV, voice calling, GPS and video recording. Reliance Communications is also offering a free 4 GB SD card but customers can upgrade the memory up to 32 GB.