Poco M2 Pro confirmed to launch in India on July 7, to be Flipkart exclusive 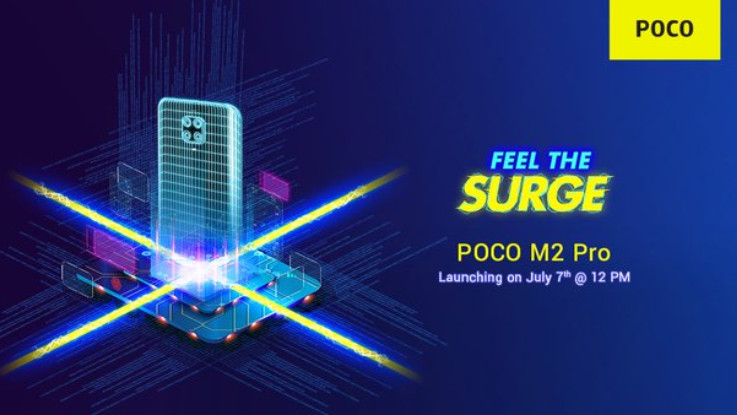 The next Poco smartphone will be named as Poco M2 Pro.

Poco has finally confirmed that it will be launching a new smartphone in India this month. The brand has confirmed the name and launch date of the upcoming Poco smartphone.

The next Poco smartphone will be named as Poco M2 Pro. The company has confirmed that it will launch the phone on July 7. Poco revealed this information on its official Twitter handle. The tweet reads, “For all those who were on the edge of their seat. It’s time to #FeelTheSurge with the #POCOM2Pro. Arriving on July 7th @ 12 PM.”

The smartphone will be launched on the said date and the event will kickstart at 12:00 PM onwards. The company has also confirmed that the upcoming smartphone will be exclusively available on Flipkart. The teaser image further reveals that the phone will come with a quad-camera setup, which is similar to what we have seen in Redmi Note 9 Pro Max.

The Poco M2 Pro with the model number M2001J2I was spotted listed in the RF exposure section of the Xiaomi India website. Apart from the SAR value of 1.6 W/kg of the device, no other details on the specs have surfaced on the RF exposure page. Notably, the model number of the Poco F2 Pro is M2004J11G, so Poco M2 Pro is not likely to be a rebranded variant of Poco F2 or the Poco F2 Pro.

The upcoming smartphone is said to be powered by a Qualcomm Snapdragon 720G processor. Meanwhile, the company has also confirmed that it will launch its first truly wireless earbuds in the country. The truly wireless earphones will be called the Poco Pop Buds.