Poco C31 key features have been revealed ahead of its launch in India. It will feature a waterdrop notch display and a big battery. 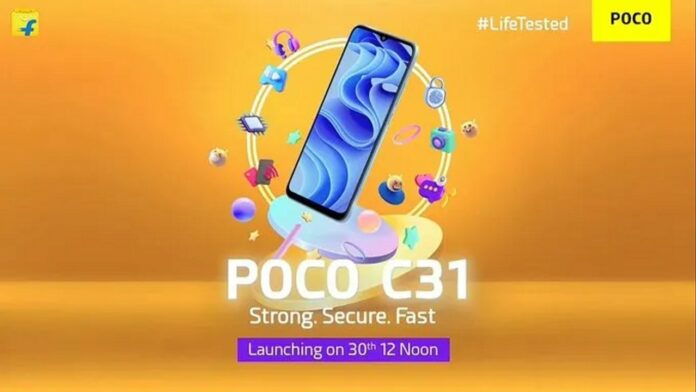 Poco C31 is already confirmed to be launching in India on September 30. Now ahead of the launch, the key features and design of Poco C31 have been revealed.

The Poco C31 landing page on Flipkart has revealed new information about the upcoming device. As per the listing, Poco C31 will be arriving with a teardrop notch display with a slightly thick chin. Under the hood, it will pack an Helio G35 chipset, coupled with 4GB of RAM.

The page suggests that the phone will offer a long battery life with a 25 percent longer lifespan for the battery. Some of the other Poco C31 key features teased are a fingerprint scanner and face unlock for security. The other specifications of the Poco C31 are under wraps.

The phone could be an updated edition of the existing Poco C3. This phone was launched in India last year in October with a starting price of Rs 7,499.

Poco C3 sports a triple camera setup with a 13-megapixel rear camera with LED flash, 2-megapixel macro lens and 2-megapixel depth sensor. For the front, there will be a 5-megapixel camera for selfies and video calls.