Virtual Pinboards offering social network - Pinterest is all set to launch its official app for the Android platform at the Google I/O later this week.

Pinterest, the personalised virtual pinboard offering social network, will be releasing for Android at the Google I/O later this week. The Google I/O Conference is set to commence on June 27 at the Moscone Center at San Francisco, USA. The official Android app for this conference lists Pinterest Inc as one of the folks who will be presenting and talking about their upcoming Android app. Indeed, the Pinterest official App will be launched and made available at the conference.

Currently the Pinterest app is available for the iOS devices – iPhone, iPod Touch and iPad. This app allows three basic functions – pin an image/video/content taken through a phone’s camera, browse pins by other folks and of course, re-pin as well as comment on the pins. 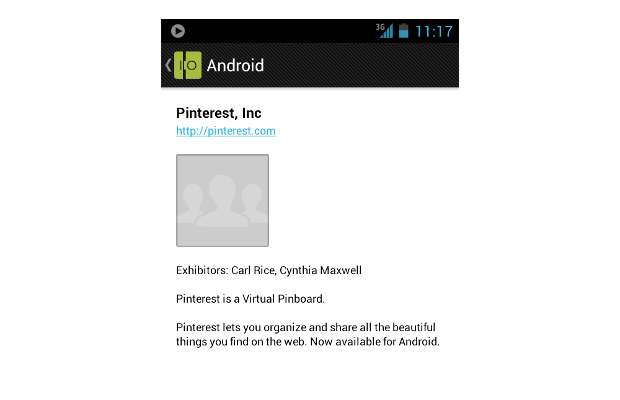 It would be interesting to see if the Pinterest for Android app arrives with anything novel or the same set of features. Not to forget, the browsing pinboards on the Android devices can be quite a data-intensive activity.

The Google I/O app has Pinterest listing in Sandbox activities where the session description talks about Pinterest app. In the end it states ‘Now available for Android’ but there are no screenshots.

While Google+ has recently gone through a major makeover, everyone’s eyes are set on Facebook to fix their Android and Facebook apps to become more responsive and fast. Recently, even Microsoft launched a new social network called So.cl but there have been no updates about any cross platform apps to use that.