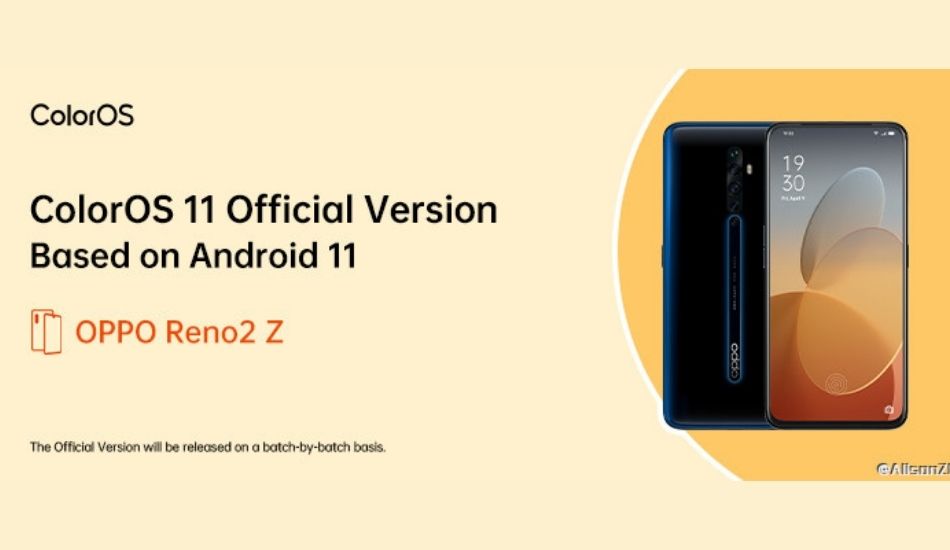 The three new phones that are joining the ColorOS 11 bandwagon are the Oppo Reno 2Z, Reno 3A and the Oppo A91

Oppo has been rolling out the ColorOS 11 update based on Android 11 since last year and the three new phones to join this list are the Oppo Reno 2Z, Oppo Reno 3A, and Oppo A91. The update for the Oppo Reno 2Z is being rolled out in India, and the Oppo A91 variants in Indonesia are also getting the update.

Oppo has announced that the Reno 2Z and the Oppo A91 will be getting the stable OTA update in a phased manner and those who have these models can head over to Settings > Software Updates > Check for update > Download > Install. Also, the update for Oppo Reno 3A is being rolled out in Japan, as per a report by PiunikaWeb.

Oppo also released a schedule for the rollout of ColorOS 11 a few days back through its global Twitter account. The announcement contains the smartphones along with the dates on which it will receive the update and on a region-wise basis. As per this schedule, the Reno 2z was supposed to start receiving the update 2 days from now but is receiving it ahead of schedule.

In related news to Oppo, the company is working on its own in-house chips that are supposed to arrive between late 2021 and early 2022, joining fabless chipmaker Unisoc in competing against chip vendors such as Qualcomm and MediaTek.

The reason why Oppo would want to go with custom-made chips is better compatibility between hardware and software. A good example could be Apple who uses its own Bionic chips for its products such as iPads and iPhones