Oppo Find X5 Series is all set to make its global debut on February 24. The series will be launched via live stream on its official channels. 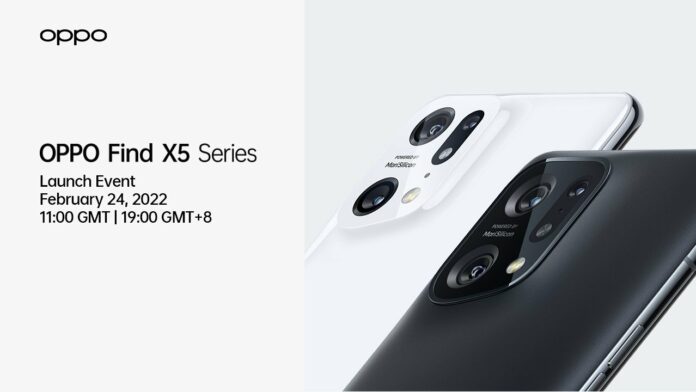 The company has already confirmed its three-year partnership with Hasselblad to co-develop camera technologies for its flagship Find X series. It will also use the MariSilicon NPU, which is a 6nm chip for handling image processing tasks.

Oppo has announced that Oppo Find X5 series launch event will take place on February 24. The virtual event will be live-streamed at 11:00 AM GMT/19:00 GMT+8.

Oppo earlier confirmed that the flagship smartphones will come powered by the Qualcomm Snapdragon 8 Gen 1 chipset. The phones will be running the ColorOS based on the Android 12 operating system.

Under the hood, the device will come with Snapdragon 8 Gen 1 SoC along with Oppo’s own MariSilicon X Chip. The phone will be backed by a 5,000mAh battery. There will be support for 80W fast charging and 50W wireless charging. Lastly, the device will run Android 12 with ColorOS 12 on top. For security, it will feature Goodix G7 in-display fingerprint scanner.

As for the vanilla Oppo Find X5, the phone will reportedly pack Dimensity 9000 chipset. It should have the same 5,000 mAh battery with 80W wired, 50W wireless charging.