Oppo F19s launch date in India has been confirmed. The phone will launch on September 27th later this month exclusively on Flipkart. 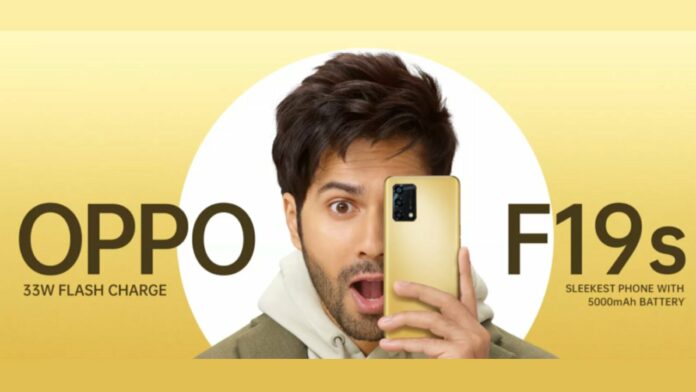 Oppo has officially confirmed the launch date of Oppo F19s in India. The brand will be launching the new F series smartphone in the country on September 27th later this month. Ahead of the launch, Oppo has also teased the key specs of the upcoming F19s.

Oppo F19s will go on sale in India via Flipkart. The phone’s microsite on Flipkart has also confirmed Oppo F19s launch date. It also reveals that the company will also be launching the Oppo Reno6 Pro 5G Diwali Edition in India soon.

For the features teased, Oppo has revealed that the phone will measure 7.95mm. It is said to be the sleekest phone with a 5,000mAh battery. The handset will support 33W Flash Charge technology.

Further, the teaser image confirms that the F19s will come with a triple rectangular camera module at the back. It will be available in Glowing Black and Glowing Gold colours.

Oppo F19s will sport a 6.43-inch AMOLED screen with a punch-hole design. Further, it will offer a 20:9 aspect ratio and a Full-HD+ resolution. There will be a triple camera setup at the back of the smartphone.

The Oppo F19s will further ship with 6 GB of RAM. In addition, it will have support for up to 5 GB of virtual RAM. The handset will run on ColorOS 11.1 based on Android 11. The F19s will measure 7.95mm in thickness and weigh 175 grams.